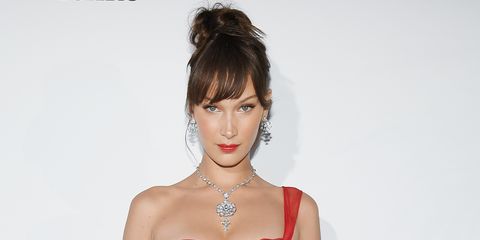 Bella Hadid stepped out at the Dior dinner at Cannes Film Festival Saturday night in a jaw-dropping sheer red dress.

Hadid accessorized the stunning dress with Dior makeup (of course) and Bulgari diamonds, which took front and center with the off-the-shoulder gown.

The model shared pictures of herself getting ready for the event on her Instagram grid and Instagram Story, crediting her makeup and jewelry in the caption of her photo.

Hadid also wore Bulgari diamonds to the Ash Is the Purest White premiere at Cannes earlier this week.

She wore a princess-worthy floor-length rose-colored ball gown to the Ash Is the Purest White premiere, where she also made headlines for sitting with her ex-boyfriend, The Weekend (real name Abel Tesfaye), during the screening.

The former couple were also spotted kissing at the Magnum x Alexander Wang party on Thursday.

"You could feel the energy between them and there was no doubt they were together. They were whispering and holding hands while talking. People were coming over to say hello, but they were focused on each other and never got too far away from one another," a source told E! News of Hadid and Tesfaye's PDA at the Magnum party.

"They had some drinks and were dancing and talking," the source continued. "He had his arm around her waist and was pulling her in close. She was touching his face and stroking it. They kissed a few times passionately. They left Magnum Beach together at the end of the night. They didn't care who was watching. There were cameras all over and they didn't mind."

No word yet if Tesfaye is also at the Dior dinner.

This content is created and maintained by a third party, and imported onto this page to help users provide their email addresses. You may be able to find more information about this and similar content at piano.io
Advertisement - Continue Reading Below
More From Fashion
Denim Jackets You Can Wear All Year Long
Your Go-To List of the Coolest White Sneakers Ever
Advertisement - Continue Reading Below
Cute Gym Bags You Won't Mind Schlepping to Work
Summer Color Trends That Double as Mood Boosters
Bucket Hats to Top Off Any Outfit With
Found: Long Pendant Necklaces You'll Wear Forever
What Joey Wölffer Wears to Work
The Best Watches Seen at Watches & Wonders 2021
Madewell's Spring Sale Is Giving Me Life
How to Make Biker Shorts Fashun