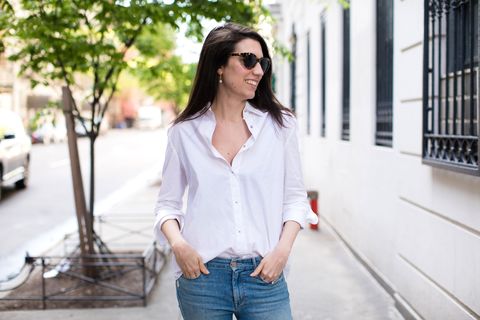 In our biweekly series, editors share "the item they wear to death," whether it be a basic white tee or a super-trendy jumpsuit. Prepare yourself (and your credit card) for some guilt-free shopping.

Let's get one thing out of the way: Yes, this is the white button-down that the Duchess, formerly known as Meghan Markle (well I guess she's still known as Meghan Markle, but at the time it was pre-Royal Wedding), wore on her first official outing with Prince Harry. The two made their debut as a couple at the Invictus Games in September 2017, and for such a momentous occasion, yes one that called for semi-casual attire, Markle wore jeans, flats, and a white Misha Nonoo top called the Husband shirt (a detail that made its way into many a cheeky headline). She looked fab.

I'd been on a hunt for the PWBD for several years (truly, at least five), with zero success. There was always something off about every shirt I tried on or bought-and-returned: too sheer, too boxy, too girly. Misha Nonoo's shirt is none of those things.

The Husband shirt has a slightly oversize fit, which lends itself perfectly to a put-together jeans look like Meghan Markle's—this is how I wear it most often since it dresses up denim just enough for the office (at least, Marie Claire's jeans-friendly office!). It also has that effortless I-just-threw-it-on-and-look-great vibe for the weekend. Another standout detail is the buttons. Instead of traditional plastic buttons, there are metal closures that fit through the button holes, which gives the top an extra polished feel. If I had a tiara for every time someone complimented those non-button buttons, I'd have more crown jewels than QE2.

Worn under a blazer or tucked into a pencil skirt, the shirt looks both professional and cool: a tricky combination. The cuffs are extra long, which is a chic detail, but they can also be rolled up in that effortless Jenna Lyons–esque way.

Here is a bad picture of me (please excuse the open suitcase) wearing this shirt tucked into a skirt for a work event. Notice the extra long cuffs!
Sally Holmes

Now that we're friends, I feel I can share another confession with you: I own four of these shirts. Yes, four. I almost bought the blue version once, but panicked and switched back to white before checking out. Why, why, do I own so many of this shirt, you ask? I put one on at least once a week. They're starting to show signs of wear due to, well, lots of wear, plus dry-cleaning, the occasional coffee spot, etc., and I love having a super pristine option for the fancier of occasions. I also own one shirt in a size smaller (an extra-small) than the rest (small), because I realized the size down tucks into skirts better, while my normal size works better with pants.

Finally, did you not read the part where I said this is the perfect white shirt? I'm not kidding, it is PERFECT. Don't believe Misha Nonoo when she says on her site, "Every brand claims to have 'the perfect white shirt.' Not us. We know our crisp cotton poplin shirt is no angel." Sorry Misha, your perfect shirt is my queen.

More Items We Love
The Item I Wear to Death: My ASOS Leather Jacket
I Found the Best Vintage Trench Coat on eBay
I Found the World's Best Denim Jacket
This content is created and maintained by a third party, and imported onto this page to help users provide their email addresses. You may be able to find more information about this and similar content at piano.io
Advertisement - Continue Reading Below
More From What I Wear on Repeat
An Editor's Review of the Chanel Boy Bag
Found: The Perfect Long-Sleeve White Tee
Advertisement - Continue Reading Below
My Honest Review of the Cartier Love Ring
These Joah Brown Empire Joggers Changed My Life
The Bright Red Sweater That's Actually a Neutral
If You Need Me This Winter, I'll Be in This Jacket
These Gold Hoops Are the Goldilocks of Earrings
DIY: Turn Sunglasses Into Optical Frames
You'll Wear a Burberry Trench Forever
The Exercise Dress I Fell For on Instagram