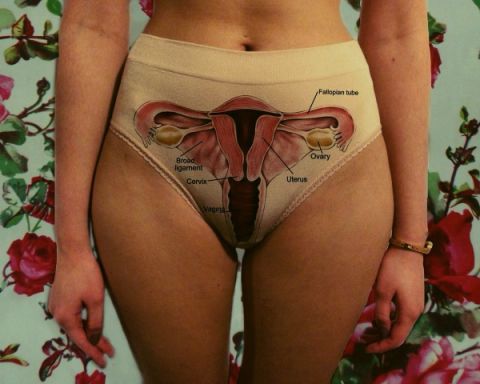 We knew this day would come. Yes, somewhere deep inside we knew that one day someone would create a pair of anatomically correct vagina underpants. How did we know this? Because when we were little, boys would walk around with Superman or Batman logos emblazoned smack dab on the middle of their junk (perhaps this is what led to the false pretense of considerably-sized manhood, and later the overcompensation for it), and girls would be stuck with the days of the week or flowers. So it's happened. An artist, Eleanor Beth Haswell through her 'Why Are You So Afraid of Your Own Anatomy?' art collection fashioned a bra to look just like bare nipples and a pair of undies with a graphical diagram of a woman's reproductive anatomy--a vagina blueprint, if you will. Pay attention, guys.


Anatomically correct underwear from the collection 'Why Are You So Afraid of Your Own Anatomy?'
Courtesy of Eleanor Beth Haswell


Nipple bra from the collection 'Why Are You So Afraid of Your Own Anatomy?'

Shock and awe aside, the message that Haswell is trying to convey is an important one. "Throughout history we, as women, have fought to break loose from the preconceived image of how we should act in society in order to be our own person, with notions and beliefs that we've formulated ourselves," says Haswell. Keeping company with Christopher Kane's Spring/Summer 2014 runway collection, Cara Delevigne's 'Free the Nipple' campaign, and even in Orange is the New Black where it became evident that the majority of inmates didn't know the layout of their own anatomy, the artist thinks that these social stereotypes need to continue to be challenged. Men can freely walk around without a shirt and women are shamed, even sued, for the slightest nip slip (we're looking at you, Janet Jackson). We couldn't agree more.

We emailed the 18-year old artist to find out more about her current and previous collections and how feminism plays a part through all of it.

Marie Claire: What inspired you to create this set?

Eleanor Beth Haswell: As I was focusing on an art project based on body shaming at the time, I began to notice a lot more shaming online, especially in the UK. It's the nipple that's deemed to be the issue, the fact that both men and women have them yet a woman's must be censored. I just don't understand how people claim that we don't need feminism, but are offended by something as innocent as the nipple, and are happy to create a divide to suggest that a woman who does what she wants with her body is unacceptable. Why is there this divide between genders? The amount of negative comments, suggesting people are 'easy', suggesting people don't have respect for themselves, all from showing a piece of their body that everyone has and shouldn't be afraid of. This piece isn't being gender specific, suggesting that all women have this particular anatomy, it was a question on anyone who chooses to shame women, those who would find it acceptable to wear a bra that would almost look like a breast from a distance, but be relieved at the thought of a woman being covered up. Those who think there is a major difference between the acceptance of a man's chest to a woman's. And to those who are happier for one gender to do what they want, be with who they want and show what they want over another.

MC: You began a female-identified art collective. Why did you decide to start it and how it came to fruition?

EBH: It was formed to make a place where young girls can be a part of an art scene and share their work, and host exhibitions where other young girls are welcome. The idea of a female-identified collective helps to create a safer space for young artists with similar ideologies to work alongside one another. The name Clandestine has the meaning 'kept secret or done secretively, especially because illicit', which fits quite well in comparison to women's art. Originally there were 4 members, but we received applications from other artists and we now have seven girls working in the collective. So far we have had one exhibition, titled "And So, The Flowers Bloomed".

MC: The word "feminism" seems to be at the heart of everything you do. What does it mean to you?

EBH: Feminism to me is equality between all genders. Anyone can be a feminist, not just women like some people are lead to believe. For me, it is the overall belief that you shouldn't be judged on what you do or what you wish to achieve by your gender, and is one of the most important things that we need in society.

I've always thought that the way women are viewed in society isn't right, but it only really hit me around this time last year, when I started to focus on feminism for my college courses. We can look anywhere today and women are constantly being exploited and criticized online, in music videos, and even in the media. We can see articles about women in countries all over the world still being stoned to death for alleged adultery. There is constant victim blaming on women for dressing how they want to dress as they get branded with the 'asking for it' label. It's appalling knowing that the ones who suffer are the ones who are blamed.

MC: Tell us why you focused on body shaming.

EBH: I decided to cover body shaming in two of my art projects, and hope to continue with the theme for my future work. Being in an environment where students around me are constantly shaming young girls for what they choose to do with their bodies is beyond me. We are living in the 21st century and women are still being pressured to remove all body hair to be deemed attractive. The media and society both have a huge impact on girls from a really early age, stressing that they must live up to these expectations and it should not be the case. It's down to personal choice.


From the artist's art project on body hair

MC: You also did a domestic violence project. Tell us about it.

EBH: The piece "I Respect Pieces of Shit More Than You" was something massively influenced by my personal experience. In a few of my pieces from this project I used writing on a mirror to portray a message. My intention was to have these messages being reflected, focusing not only on the physical abuse within a domestic relationship, but also the mental, and how it has an effect on the victim. Some pieces, including "It All Goes Unnoticed" highlight upon the victim blaming in today's society, and how people usually turn a blind eye.

MC: Do you think it's possible to define beauty?

EBH: It is impossible to define beauty, everyone's idea of beauty is completely different, and rightly so. I don't know why anyone would want to live in a world where everyone's idea of beauty is the same. I believe beauty differs so much from person to person, that it can't actually be defined as it only exists on a personal level for each and every individual. As long as people are comfortable with how they want to portray themselves no definition is really needed.

Up Your Culture IQ: The Best Vintage Looks Inspired By Charles James

10 Signs You're a Feminist

This content is created and maintained by a third party, and imported onto this page to help users provide their email addresses. You may be able to find more information about this and similar content at piano.io
Advertisement - Continue Reading Below
More From Fashion
The Top Fall 2021 Handbag Trends
Refreshing Ways to Style a Cardigan
Advertisement - Continue Reading Below
The Foolproof Guide to Cleaning Your Jewelry
Nordstrom's 2021 Anniversary Sale Is the Best Yet
Hats That Will Make a Statement—In a Good Way
The Most Exciting Jewelry Trends for Fall 2021
Maxi Dresses That Work for Every Occassion
The 100 Best Shopping Sites to Browse Through
The Perfect Vests for Layering
How to Make White Sneakers Look Brand New