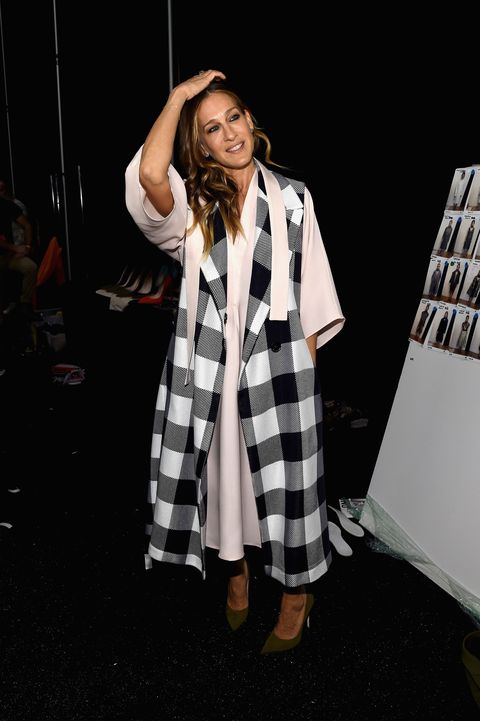 Speaking with Woman Magazine (via Digital Spy), Cynthia Nixon, unlike her Sex and the City costar Sarah Jessica Parker, didn't bother playing coy about her interest in starring in a third sequel (threequel?).

"I'd absolutely do another Sex and the City movie—if Michael Patrick King wanted to write it and Sarah Jessica Parker wanted to do it. I'm very proud of it," she said.

One down, three more to go.

Update, 4/12: Hate to be the bearer of the letdown of the century, but we can now confirm that Parker's Instagram post wasn't a Sex and the City 3 teaser, but a behind-the-scenes snap from her ad campaign shoot for the SJP Collection launching at Bloomingdale's next month.

The shoot took place at the department store's iconic flagship location at 59th street and Third Avenue, where onlookers watched as SJP strutted her stuff (LBB in hand), posed on a taxi, and bravely struck a pose on the Bloomingdale's marquee.

The collection will launch mid-June in-stores and on bloomingdales.com.

Original Post: Oh, Sarah Jessica Parker—you sure know how to send us into a SATC-induced tizzy.

Yesterday, SJP took to her Instagram to unveil a, shall we say, ambiguous image of herself, stiletto-clad and gracing the NYC pavement. The caption? "Well. I guess the cat's out of the (little brown) bag. As usual, we will keep you posted on every detail as we are able. I'm under strict gag order until then."

*GASP* Is this the confirmation of the Sex and the City 3 film we've been waiting for? Well, maybe. And maybe not. It seems some are speculating that said little brown bag isn't evidence of an indulgent shopping trip à la Carrie Bradshaw, but rather her way of announcing that her shoe line,SJP by Sarah Jessica Parker, will now be sold at Bloomies a.k.a. Bloomingdale's. Which, we guess, wouldn't be a bad consolation prize.

In any case, this is one sure way to stir up press via Sex and the City, Parker, and we can't blame you for it.

This content is created and maintained by a third party, and imported onto this page to help users provide their email addresses. You may be able to find more information about this and similar content at piano.io
Advertisement - Continue Reading Below
More From Fashion
Cozy Sweatpants to Spend the Day or Week In
Black-Owned Shoe Brands You'll Fall In Love With
Advertisement - Continue Reading Below
The Best Black Jeans to Build Your Outfit Around
Our Favorite Summertime Pajamas
The Dreamiest Tie-Dye Swimwear for Summer 2021
Embrace In-Between Season With a Trench Coat
Comfy and Stylish Sandals to Walk a Mile In
The 26 Best Leggings, Based on Ratings and Reviews
Your Guide to Spring 2021's Wardrobe Essentials
A Sleek Coat Is Chloe Gosselin's Power Pick