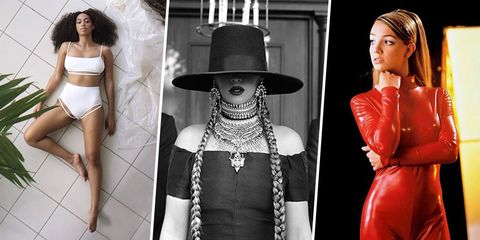 The only thing better than a great song is a great song augmented by a short film that adds to the emotional arc of the music. Then, another thing that can take *that* from great song to proper CHOON is the addition of great fashion, because you, uh, hear with your eyes too. (You know what I mean.) Here, 12 of the most chicly wardrobed visuals ever.

We're all guilty of misusing "iconic," but this—this is it. In her garbage bag suit and rhinestone sunglasses, Missy pushes her aesthetic near to bursting. (But it's fine because the suit isn't inflated enough to Hindenburg.) Also, Lil' Kim.

Look at any collection from the past few years—hell, look at what any of us are wearing on the streets now—and you'll see the influence of this video. (And that none of us who knew the '90s will ever, ever get over them.) It doesn't get any cooler than one of the best girl bands of all time in loose, louche silk pajamas.

Lives were changed by this video, which is just as well, because it took 36 stylists, led by Marni Senofonte, to put together. Add in the pieces from names such as Gucci, Fendi, Rosie Assoulin, and Alessandra Rich, and you've got one massive investment that more than paid off.

4 Solange, "Cranes in the Sky"

Aesthetic STRONG. In everything she does, Solange is exacting, and that fastidiousness applies to what she wears, a kind of sculptural, graphic softness that suggests female unity, if that makes sense. (It makes sense if you have eyes.)

On here mostly for the Jacquemus hat, also for the veiled headpiece and robe she wears in front of a pile of petits fours.

If you thought there was only that one red vinyl jumpsuit, you would be DEAD WRONG—this cinematic/musical gem is to be screenshotted and studied at length, for Britney's two white outfits and everything her backup dancers wear (a lot of silver, honestly). It won't feel like homework either, because you will love every second of it.

In this case, it could be said that the clothes outshine the sappy Liam Hemsworth tribute, but that is only because the parade of all-white looks is so incredibly wonderful. Giambattista Valli couture for running along the beach! A frilly Palomo Spain top for rolling around in a meadow! Bucolic, breathy fashion at its finest.

Killer song, killer clothes, which is to be expected from one of the most artistic singers out there. (She performs in McQueen with wraithlike dancers surrounding her, it's freaky/marvelous.) Click, click.

Synopsis: Italian cinema, so much sexual tension, and the summer wardrobe of Dolce & Gabbana dreams.

I am scared but very curious about what goes on in Grimes' brain, because what comes *out* of it is always so beautiful, so strong, and just a little scary. That comes through in what is basically her audition to be a comic-book villainess—and the madcap mixes, like a Versace sweatshirt styled with pink boxing gloves, ski goggles, and fangs.

Chelsea Peng I'm Chelsea Peng, the assistant editor at MarieClaire.com.
Advertisement - Continue Reading Below
More From Fashion
Stock Up on Cute, Flirty Summer Dresses
Cartier Women's Initiative Announces Its Finalists
Advertisement - Continue Reading Below
What Marie Claire Editors Wore to Get Their Jobs
Is the Next Big Wedding Trend Reversible Gowns?
Our Favorite Throwback "It-Bags"
What to Buy at Nordstrom's Spring Sale
The Best New Spring Shoes to Treat Yourself To
We Found the Best Modest Swimsuits for Summer
Fashion Comes Together to Fight Coronavirus
Your Official Guide to the Royal Family's Tiaras