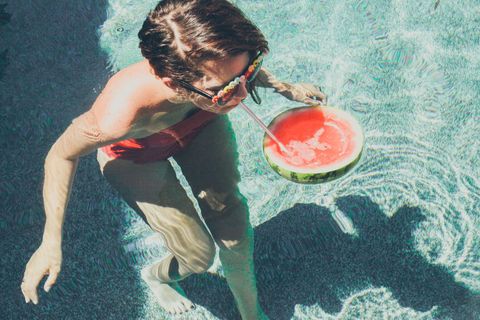 Last week, I was sitting at happy hour with a half-finished beer in front of me, talking to a friend about just how much we drink on a regular basis.

"Well, it's different for you," she insisted. "You don't really drink anymore."

I was annoyed as soon as she said it. It felt like she'd offhandedly pointed out that I wasn't fun, which is not something one ever hopes to hear. Beyond that, I was offended because being the girl who "doesn't really drink" wasn't an identity I'd had since my freshman year of college.

I didn't go broke, but I was barely breaking even

It's true that I've never been someone who routinely gets wasted on Friday nights, but going to a bar and having three or four beers certainly wasn't out of the question for me. And yet now, apparently, other people see me as the friend who doesn't really drink.

This all started around the time I moved from a small town in upstate New York to Los Angeles, only to learn one very simple truth: drinking in a big city is expensive. (Related to that truth, I also learned that going out to eat in big cities is very expensive, taking ride shares home added up quickly, and happy hour deals in LA were still more expensive than the prices I was used to.)

Nonetheless, I spent my first six months exploring the city on an entry-level salary. Soaking up L.A. on $35,000 per year isn't the most realistic endeavor, which I learned within those first six months. I didn't go broke, but I was barely breaking even, which was frustrating because I'd depleted my savings during my post-grad move to L.A.

So, I decided to cut back and implement a few rules:

Even if I wasn't driving, I would never buy more than one drink at a bar.

I would limit my happy hour intake to once a week.

I would only go out to eat at restaurants where an entrée cost $12 or less.

I'd stop buying lunch at my office.

Looking at these rules, I can see why—a year and a half later—my friend would think I don't really drink anymore. My tolerance isn't what it used to be. I still go to happy hour about once a week, and I never buy more than one drink, so the whole experience costs me six bucks, with tip. I work remotely now, instead of at an office, so I never buy lunch.

When I go out to eat more, I never do delivery. And within the last 18 months, I've found my go-to Indian restaurant, Thai place, ramen bar, and taco stand where I can get dinner for less than $10 ($13 with tip). I've also learned to really enjoy cooking, because nothing forces you to learn to cook food you actually like more than eating the majority of your meals at home.

When you're new in a city, you're more apt to say "yes" to everything because you need to make friends, and I reeled that in as well. I stopped having "networking drinks" with the random people from my office I didn't know, too. This helped in a major way.

When you're new in a city, you're more apt to say "yes" to everything because you need to make friends

When I quit my office job to go freelance at the beginning of 2015, my savings were what made my career change possible. I aggressively saved for the last two months that I was at my full-time job and, when I left, I had three months of living expenses in the bank. In 2015, my first year as a freelancer, I saved an additional $5K even though I was not making too much more than I did at my entry-level job.

Does it suck sometimes to turn down invitations, or be the one drinking seltzer while everyone else nurses their Pinot Noir? Yes. I dislike the fact that I'm now seen as the often-sober person because I honestly liked the let's-have-another-round version of myself.

I also think that imposing rules on my spending habits now makes me feel guilty for spending money at all, which isn't particularly healthy, either.

I honestly liked the let's-have-another-round version of myself

While I appreciate that my friends are happy to do at-home happy hour, instead of meeting up at nice restaurants after work, I don't want to feel guilty about occasionally choosing a $30 meal over a $10 bowl of ramen when I have "splurge weeks."

All in all, I was probably spending $150 extra dollars a week on eating and drinking out (office lunches, brunch, ubers, the works). So, I was spending about $600 on "experiences" per month, which was pretty much ALL of my disposable income after paying my bills. I cut that down to about $200 a month, so I was easily saving $400/month. I also made the choice to move to a cheaper apartment, which saved me an extra $250 per month.

I plan to continue saving regularly, but now that I've got a healthy emergency fund, I also need to let myself off the hook a little and consider revising my rules. But even though I can't seem to stomach more than one drink right now, I definitely don't regret the $8,000 in savings.