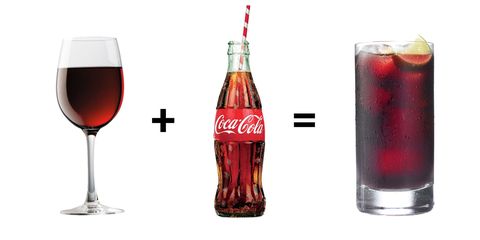 Upon returning from a trip to Spain, a friend of mine screamed at a college tailgate "KALIMOTXO!" before presenting us with red wine that she then, to our horror, mixed with Coca-Cola. It was...interesting.

Once, after hearing a fellow editor at a press dinner years ago rant about how young people in China were mixing very expensive red wine and Coke, I mentioned to her that it seemed like a wealthy take on the popular Spanish (and Latin American, and Eastern European...you get the gist) cocktail. She looked like she was about to pass out.

To stop you from being *that* person, here's a basic guide to kalimotxo—and why you should try it.

Simply stated, it's red wine and coke. It's generally served over ice in short glass tumblers. Sometimes, it's served with lime. The mix is supposed to be 50% Coke and 50% wine, but like with everything, sometimes you get a bartender who 1) doesn't know how to make the proper drink or 2) feel like they're doing you a favor by giving you more booze. Depending on what country you're in, there might also be other additions—like blackberry liqueur–or substitutions, like orange soda instead of cola.

Where It Came From

The drink originated in Spain, though other countries (including a big part of Eastern and Central Europe) drink the same cocktail. The name can be traced back to the 1970s, when the popular name "rioja libre" was overtaken by "kalimotxo," a combination of two nicknames. In some parts of Spain, it's commonly spelled as "calimocho" (basically, to help with pronunciation confusion).

The original idea of mixing the two beverages was, essentially, to mask bad red wine. So really, you're tasting a lot of coke with a little bit of a wine aftertaste. In fact, that's generally the origin story of the drink—that in 1972, as part of the Puerto Viejo festivities, servers noticed the wine they were serving wasn't good, so they tried to cover up the sour taste with something they had on hand—cola. And kalimotxo was born.

If you need more info/incentive, you can watch these people drink it for the first time. (Skip to 1:41.)

Now go forth and spread the kalimotxo gospel. (If anything, it makes for popular bar banter.)

Samantha Leal Senior Web Editor I'm Sam, the senior editor at MarieClaire.com.
This content is created and maintained by a third party, and imported onto this page to help users provide their email addresses. You may be able to find more information about this and similar content at piano.io
Advertisement - Continue Reading Below
More From Fresh Cocktail Recipes We Love
The Most Delicious Mocktail Recipes to Try
Delicious NYE Cocktails to Ring in 2021 With
Advertisement - Continue Reading Below
39 Fourth of July Drinks Better Than Fireworks
Tequila Recipes to Get the Zoom Happy Hour Started
50 Easy At-Home Vodka Cocktail Recipes
Elevate Your Next Toast With a Champagne Cocktail
91 Drinks to Get You in the Holiday Spirit
36 Fall Cocktails for When It Starts to Cool Down
72 Refreshing Cocktails to Drink All Summer Long
12 Super Simple Beer Cocktails to Cool You Down