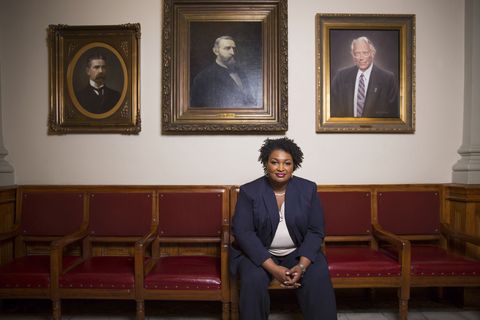 Stacey Abrams is accustomed to coming out on top. She was the valedictorian of her high school, graduated magna cum laude from Spelman College, earned a J.D. from Yale Law School, became the first woman to lead either party in the Georgia General Assembly, and was the first African-American to serve as minority leader in that state’s House of Representatives. Tonight, she won the Democratic gubernatorial primary in a landslide victory. So when she tells you she’s going to win the race for governor of Georgia this fall, it’s easy to believe her. The odds are against her—the state hasn’t had a Democratic governor since 2003, and it has been entirely controlled by Republicans since 2005—but Abrams, who overcame childhood poverty and has been charting her life on an Excel spreadsheet since she was 18, isn’t discouraged. In her new memoir, Minority Leader: How to Lead from the Outside and Make Real Change, out this month, she teaches others how to follow a path like hers.

MARIE CLAIRE: Why did you want to write this book?

STACEY ABRAMS: The two questions I get most are, “How did you do this?” and “How can I?” After years of having conversations with people in communities who are often isolated from the kind of power we know we need, I thought, This is the time to write my story. What I really want people to understand is the leadership and power we seek is ours; we simply have to understand how to achieve it.

MC: You've said you wrote it for outsiders. How is that?

SA: Many books that tell you how to achieve come from a privileged position. If you can’t see yourself in the advice, how can you use it? I wanted there to be a book for those of us who’ve been on the outside that spoke in an authentic way about the challenges we face. The consequences for failure are very different if you’re a woman or a person of color than they are if you’re a guy. If you’re a guy who makes a mistake, you get a second chance. Often for those of us who are outsiders, we make a mistake and that’s the end of the conversation. I wanted to confront that in a way that’s aspirational and hopeful but grounded in real ideas and solutions.

I want people to understand that while being an outsider is not a permanent impediment to success.

SA: Always. Look at the power structure I’m facing right now running for governor in a country where there is not a single African-American governor. But I want people to understand that while being an outsider is something you must acknowledge, it is not a permanent impediment to success.

MC: How do you stay positive?

SA: I was at an event recently with mayors from across Georgia. A gentleman whom I had previously met and who recently won an election for a city council position came up to me and said, “I won my election; I told you I would,” and I said, “I know.” And he said, “You just have to speak it into existence;” I said, “That’s what I’m doing.” He smiled and said, “You know, I don’t know if we’re ready for you yet, but I’m glad you’re trying.” So even in his moment of joy about his success, he told me,“But you’re not going to win because you’re black.” When this first started happening—especially when coming from people I’ve known for years, whom I admired and who I thought shared my vision for my path forward—it was very nullifying. But I remind myself that though this might be the biggest stage on which I’ve stood, it’s not the first time I’ve faced these questions. And I’m not doing this alone. I may be the only one with my specific profile, but there are women, people from the LGBTQ community, Muslims who are seeking to reassert their patriotism after being denounced by many, and all of us have naysayers and doubters. We must remind ourselves that our success is inevitable.

MC: It's often said that black women have to work harder to succeed in politics. Did you feel that?

SA: Oh, of course. When people doubt your right to be somewhere, the responsibility falls on you to prove over and over again that you deserve to be there. I have a fairly hefty résumé, because I’m pretty aggressive about doing things that I think I need to do. The problem is that the best achievers in our community are seen as exceptions and never rules. My mission is to become the rule—to say, look, this is what we can do, and there is nothing about my race, my gender, or my economic background that should disqualify me or anyone else. It can be hard, and I don’t want to dismiss the fact that there are moments when it is just numbing to think that I’m not being judged purely on my merit. But that has been a perennial challenge, and I’m not the exception, so the question then becomes: How do I make certain that I demonstrate that it can be done?

My mission is to become the rule—there is nothing that should disqualify me or anyone else.

MC: Do you have a #MeToo story?

SA: When I hear #MeToo, I think about those who face egregious and persistent sexual harassment and the abomination of sexual assault. I certainly have faced some denial of access and of my agency because I am a woman. I have been in positions where it’s hard to differentiate between what’s misogyny and what’s driven by racism. But I’m excited by the fact that this has been such a consistent conversation, and it has not relented. I remember the Anita Hill hearings vividly, watching those men in power deny her humanity. So to see women in this moment—especially in light of who occupies the White House—refuse to be dissuaded from demanding their equality, agency, and equity is a testament to the resilience we possess.

MC: How would you like to tackle such issues as governor?

SA: As governor, I will have the authority to use the administrative levers to ensure that there is a pathway for people to report anything that happens within state government. But more broadly, I think it’s important to have a leader who signals to all of the companies operating in the state that this behavior is not going to be tolerated and that women have a friend in the governor’s office who will hear their concerns and take steps to help them.

MC: You've written eight romance novels, which is not a typical qualification for someone in your position. What have you taken from writing them to help you in politics?

SA: Writing is an extraordinarily helpful tool. Part of running for governor is diving into thorny conversations. I’ve written about a cognitive scientist, ethnobotany, and physics, so I’ve learned how to take complicated ideas and turn them into exciting stories for romance readers. It’s shaped my ability to communicate effectively. Second, it’s just fun. This work should be fun. It should be exciting and energizing to help people, which is what the role of governor is. From that, I hope what people see when they meet me is that I like this work. I like who I am. I like what I’ve been able to do. I don’t come at this job driven by grievance or anger. I am driven by hope and joy and an expectation that we can do more. And since I wrote novels as an attorney and as a state legislator, you know I know how to multitask.

MC: The first time you went to the Governor's Mansion you were turned away. Can you tell us about that experience?

SA: When you graduate from high school in Georgia as valedictorian, you get invited to the governor’s mansion. My parents and I took public transit to the event because we were too poor to own a car. We got off the bus, and as we’re walking up the driveway, before we could even say why we were there, a guard told us we didn’t belong—that it was a private event. My dad pushed back, saying, “This is my daughter; she’s on the list, and we’re invited,” and the guard still refused us entry. Now, my parents are very aggressive and protective, and so they had a conversation with the guard, and he let us in eventually, but what I point out about that experience is: I don’t remember the event at all; I don’t remember meeting the governor or my fellow valedictorians—I remember standing there on this incredibly important day of my life and this man tells me I don’t belong.

MC: How would it feel to move into that mansion all these years later?

SA: It would be extraordinary. It’s critical to have a leader who understands what it’s like to be told, “No, you can’t come in.” My mission is to make certain every Georgian knows we all belong. It would be deeply gratifying and humbling to be able to open those gates wide for everyone and say, “Come on in.”

This story appears in the April issue of Marie Claire.

Kayla Webley Adler Deputy Editor Kayla Webley Adler is the Deputy Editor of ELLE magazine.
This content is created and maintained by a third party, and imported onto this page to help users provide their email addresses. You may be able to find more information about this and similar content at piano.io
Advertisement - Continue Reading Below
More From Politics
In Conversation With Secretary Granholm
Laphonza Butler on What's Next for EMILY's List
Advertisement - Continue Reading Below
Anita Hill Believes We Can End Gender Violence
For Teachers, Going to Work Can Mean Life or Death
Want to Help Moms? Prioritize Menstrual Equity
Abortion Rights Start at the State Level
All of Your Abortion Questions Answered
The Texas Abortion Snitch Site Is Having a Bad Day
The Future of Afghan Women Depends on Us
How You Can Help People in Afghanistan