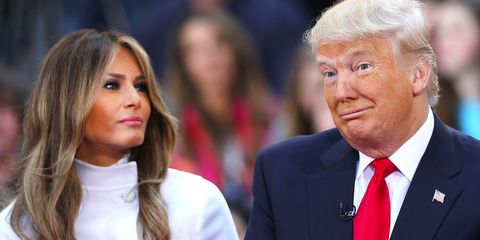 This news will probably come as a shock to everyone—according to a new report, Melania Trump hates her life. Seriously.

While the first lady's spokesperson told Us that Melania "is focused on being a mom and is quite enjoying spring break at Mar-a-Lago while working on future projects," according to a source, this isn't the whole truth. Allegedly, the president's wife hates that "all eyes are on her relationship with her husband. It’s not an easy time for her."

Following the slew of recent allegations that Trump had affairs with a number of women, and Stormy Daniels' detailed interview on 60 Minutes, Melania has felt the pressure on her intensify, and apparently, she wants out of the marriage.

A "family insider" reveals to Us Weekly that "She is very, very unhappy with her life. If she could, she would get away from Donald and just be with her son."

And according to Us Weekly, the rift between Melania and her husband has only been growing. Despite a White House schedule detailing that the president and first lady would be departing for Mar-a-Lago together for their recent trip, when the time came to leave, Melania arranged her own transport.

Us Weekly reports that "Melania chose to take her own motorcade to the base instead, meeting POTUS on the plane and avoiding any photos together." While a source says that this is because "she’s very independent," it certainly sounds as though the many allegations of Donald Trump's affairs have taken their toll.

Related Story
Melania Trump's $64,000 Trip to Mar-a-Lago
Amy Mackelden Amy Mackelden is a freelance writer, editor, and disability activist.
This content is created and maintained by a third party, and imported onto this page to help users provide their email addresses. You may be able to find more information about this and similar content at piano.io
Advertisement - Continue Reading Below
More From Politics
Kristin Urquiza Wants Justice for COVID-19 Victims
A Breakdown of VP Harris's Net Worth
Advertisement - Continue Reading Below
WH Announces Removal of the Hyde Amendment
What Liberation Means This Juneteenth
Kathryn Garcia: It's Time to Step Up or Shut Up
A Valedictorian Speaks Out Against Abortion Bans
Standing Between Care and Violence
Seeking Healing a Century After the Tulsa Massacre
What to Know about Texas's Abortion "Trigger Ban"
A New Book Invites Us to Rethink Menstrual Equity