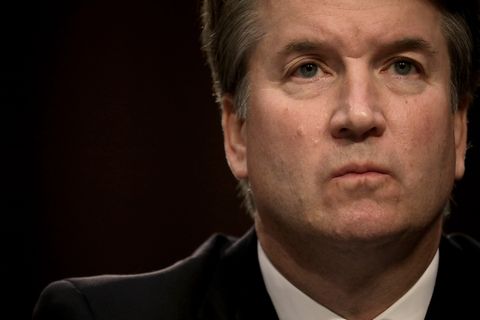 In the seven months since a shooting at Marjory Stoneman Douglas High School left 17 people dead, Fred Guttenberg, the father of Parkland victim Jaime Guttenberg, has been a leading voice in the gun control debate. After Jaime's death in February, Guttenberg told MarieClaire.com that he'd spend the rest of his life fighting for common-sense gun control. According to a tweet from Guttenberg, the activist approached the Supreme Court nominee during his Tuesday hearing—he is a guest of Senator Dianne Feinstein—and was snubbed.

"Just walked up to Judge Kavanaugh as morning session ended," Guttenberg wrote on Twitter. "Put out my hand to introduce myself as Jaime Guttenberg's dad. He pulled his hand back, turned his back to me and walked away. I guess he did not want to deal with the reality of gun violence."

Footage of the incident shows Kavanaugh visibly stopping to listen to Guttenberg trying to introduce himself, and then turning away. White House press staffer Raj Shah claimed on Twitter that security intervened before Kavanaugh had a chance to respond to Guttenberg, however. "As Judge Kavanaugh left for his lunch break, an unidentified individual approached him. Before the Judge was able to shake his hand, security had intervened," he wrote.

Kavanaugh has made clear in previous rulings that he supports what he believes to be the constitutional right to bear arms. In a 2011 ruling, considered the best indicator of how Supreme Court Justice Kavanaugh would rule on firearm cases, the judge dissented with a D.C. ban on some semi-automatic weapons, describing it as unconstitutional. "Gun bans and gun regulations that are not longstanding or sufficiently rooted in text, history, and tradition are not consistent with the Second Amendment individual right," he wrote.

Here is the photo of me trying to shake Kavanaugh's hand. https://t.co/5MtQxq5wza

In other words: One American's right to own a gun supersedes the right of another American to protect himself from them, according to Kavanaugh's ruling.

Wow, here you can hear @fred_guttenberg telling Kavanaugh that his daughter "was murdered in Parkland," and Kavanaugh whirls and walks away pic.twitter.com/VdkTij2Vdp

Guttenberg has gone head-to-head with other anti-gun control public figures since the death of his 14-year-old daughter. Following the massacre, Guttenberg addressed Senator Marco Rubio directly: "My daughter, running down the hallway at Marjory Stoneman Douglas, was shot in the back with an assault weapon—the weapon of choice," he told the senator. "It is too easy to get. It is a weapon of war. The fact that you can't stand with everybody in this building and say that—I'm sorry."

Related Stories
Fred Guttenberg on the Loss of His Daughter Jaime
Everyone Should Hear This Gun Control Speech
Jenny Hollander Director of Content Strategy Jenny is Marie Claire’s Director of Content Strategy, editing and writing about everything from politics to reality television to accessories and celebrity news.
This content is created and maintained by a third party, and imported onto this page to help users provide their email addresses. You may be able to find more information about this and similar content at piano.io
Advertisement - Continue Reading Below
More From Politics
41 Surprising Rules First Ladies Have to Follow
Asian American Women on Where to Go From Here
Advertisement - Continue Reading Below
Syrian Journalists Reflect on a Decade of War
How to Show Your Support for the AAPI Community
Activist Lydia X. Z. Brown on Disability Justice
Elisa Crespo: "I'm Not Here to Make History"
What We Know About the Georgia Spa Shootings
Dianne Morales Has Never Listened to the Naysayers
Stacey Abrams on Her Definition of Success
Grand New Party?