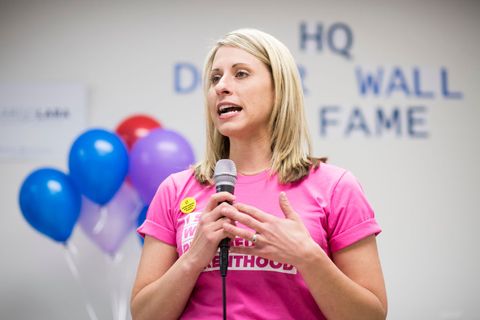 With a third accusation levied at Supreme Court almost-justice Brett Kavanaugh Wednesday—this from Julie Swetnick, who says Kavanaugh and other slipped date-rate drugs into girls' drinks with the intention of sexually assaulting them; Kavanaugh called the claim "ridiculous"—some prominent Democrats are saying: Enough. These accusations must halt his nomination, they insist. Proponents include Katie Hill and Deb Haaland, Democratic women with starring roles in perhaps two of the biggest races this midterm season.

"We're talking about putting a serial predator up for a lifetime appointment in the highest seat we have in the U.S.," tweeted Katie Hill, who is running for Congress in California's District 25. "That can't happen."

Meanwhile, Deb Haaland, who would be the first Native American woman in Congress if elected to Congress on behalf of New Mexico, wrote on Twitter that the latest round of accusations prove that Kavanaugh "does not represent our values and he should not be appointed to the highest court in the land." She added: "I believe women."

Their commitment to believing Kavanaugh's accusers over the judge echoes candidates like Stacey Abrams, running for governor of Georgia against conservative firebrand Brian Kemp, who tweeted Tuesday that she chose to believe survivors. "Even today, structural and cultural barriers have created stigma that prevents survivors of sexual assault from coming forward," Abrams explained to MarieClaire.com.

As these Democratic voices grow louder in opposition to Kavanaugh, many Republicans are doubling down on their defense of him—often by going after the women who have accused him. Of Swetnick's accusation, former GOP presidential candidate Lindsey Graham wrote on Twitter: "I have a difficult time believing any person would continue to go to—according to the affidavit—ten parties over a two-year period where women were routinely gang raped and not report it." (The best response to this, in my opinion? Writer Kerry Howley, who tweeted back to Graham with a reference to the Larry Nassar scandal: "I have a difficult time believing that hundreds of gymnasts could be molested by a single osteopathic physician over decades, and not report it.")

Related Story
What to Know About Dr. Ford's Testimony

This third accusation against Kavanaugh comes one day before the judge's first accuser, Christine Blasey Ford, will testify before the Senate Judiciary Committee about what Dr. Ford says was her teenage experience with Kavanaugh. “I thought he might inadvertently kill me,” she told the Washington Post. “He was trying to attack me and remove my clothing.” (Kavanaugh denies this.)

Related Story
Stacey Abrams on Why Women Don't Report
Jenny Hollander Director of Content Strategy Jenny is Marie Claire’s Director of Content Strategy, editing and writing about everything from politics to reality television to accessories and celebrity news.
This content is created and maintained by a third party, and imported onto this page to help users provide their email addresses. You may be able to find more information about this and similar content at piano.io
Advertisement - Continue Reading Below
More From The 2018 Midterm Elections
One Week Post-Midterms Here's What We Know
How Ilhan Omar's Speech Started Is Important
Advertisement - Continue Reading Below
You Should Get a Dog! A Retired Greyhound!
What the Election Results Mean for Abortion
Women Won Big on Tuesday. Now Let's Get to Work
Deb Haaland Will Rep Indigenous People Nationwide
The Greatest Feminist Wins of the Midterms
Gretchen Whitmer Is Ready for the Top Job
Every Celebrity Who Voted in the 2018 Midterms
30 Celebrities Who Have Endorsed Politicians