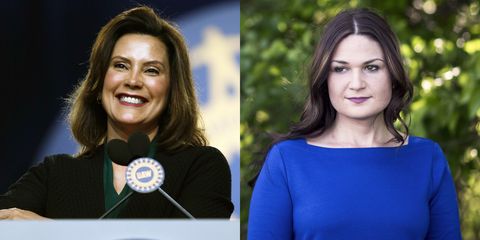 In his second major wave of endorsements for the midterm election cycle, ex-president Barack Obama released Monday a list of 2018 candidates who have his blessing. The list includes candidates Abby Finkenauer and Gretchen Whitmer, two high-profile female candidates running in 2018 in an effort to seek change. "I'm so honored!" Whitmer, who is running for governor in Michigan, wrote on Twitter.

Wrote Obama on Twitter: "Today, I’m proud to endorse even more Democratic candidates who aren’t just running against something, but for something—to expand opportunity for all of us and to restore dignity, honor, and compassion to public service. They deserve your vote." This list brings the total number of 2018 candidates endorsed by Obama to more than 300.

For Whitmer, who is running against Republican attorney general Bill Schuette for the governorship, the moment is a game-changer. "Gretchen is proud to be endorsed by Barack Obama," read a meme posted by the gubernatorial candidate's Twitter account. (On Tuesday, one day after the endorsement, Whitmer was among a crowd of protesters who were hit by a truck, but Whitmer was not injured. She said in a statement that she was "incredibly sad" about the incident, which left several others with injuries.)

In response, Finkenauer shared a throwback photo of when she met the then-Senator back in 2007:

Honored to receive the endorsement of President @BarackObama today. Here's a throwback to 2007, when I was a Page for the IA House and had the opportunity to meet the then-Senator from Illinois who was full of hope for our country. #ia01 pic.twitter.com/FUeBFnO2Dr

Jenny Hollander Director of Content Strategy Jenny is Marie Claire’s Director of Content Strategy, editing and writing about everything from politics to reality television to accessories and celebrity news.
This content is created and maintained by a third party, and imported onto this page to help users provide their email addresses. You may be able to find more information about this and similar content at piano.io
Advertisement - Continue Reading Below
More From The 2018 Midterm Elections
One Week Post-Midterms Here's What We Know
How Ilhan Omar's Speech Started Is Important
Advertisement - Continue Reading Below
You Should Get a Dog! A Retired Greyhound!
What the Election Results Mean for Abortion
Women Won Big on Tuesday. Now Let's Get to Work
Deb Haaland Will Rep Indigenous People Nationwide
The Greatest Feminist Wins of the Midterms
Gretchen Whitmer Is Ready for the Top Job
Every Celebrity Who Voted in the 2018 Midterms
30 Celebrities Who Have Endorsed Politicians