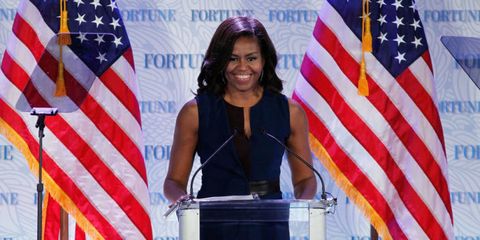 When Donald Trump was elected the next President of the United States last week, many already started looking ahead to the following election, with a certain candidate in mind: Michelle Obama. #Michelle2020 became a trending hashtag as hopeful citizens tweeted their wishes to see the current First Lady run in four years.

But what does the First Lady herself think of the idea? Would she entertain the possibility of going from FLOTUS to POTUS?

Today, as she addressed Veterans' homelessness in the White House, someone in the audience yelled to her, "Run for president!" She responded with a hearty laugh and said, "You be quiet back there," with a point of the finger before breaking into a chuckle. So maybe she shot down the idea of joining the 2020 presidential race for now—but she's still got a couple years to change her mind.

Watch the interaction below.

Audience member to FLOTUS: Run for president! @FLOTUS: Be quiet back there. (Laughter) pic.twitter.com/0yBV2flWc1