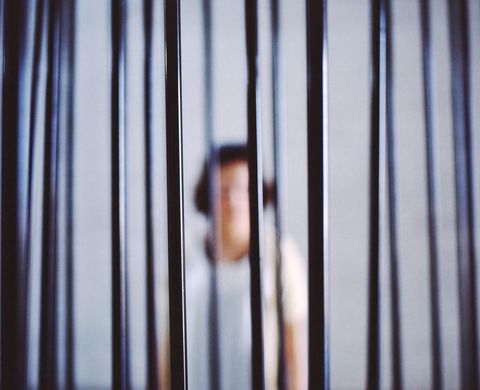 A bright spot has appeared at the tail-end of a year likely to be remembered for its extraordinary government-approved cruelty in the form of a bipartisan justice reform bill, which is expected to pass Congress and has the support of President Trump. The sweeping new bill offers better access to period products and more humane treatment of pregnant women in incarceration.

Called the First Step Act, the bill does away with many of the racist, antiquated policies currently in place in the criminal justice system. That means things like the “three strikes” rule (in which an offender charged three times for the same drug-related crime gets automatic life in prison) and mandatory minimums for drug offenses are both scrapped under the new legislation. Where incarcerated women are concerned, the act also bans the shackling of pregnant prisoners when in labor—something that’s still legal in a few states.

Surprisingly, menstrual equity even gets a shoutout. If you haven’t heard that term, menstrual equity is the movement to get rid of the stigma against periods and the people who have them on a global level. In some countries, the stigma of menstruation causes young women to miss school, while here in the U.S., many states still tax menstrual products as a luxury even though a lot of women view them as a necessity—the so-called “tampon tax”. It’s a movement that’s been gaining a lot of traction in recent years, with many states repealing tampon taxes and passing laws that provide period products in schools. Meghan Markle even spoke out about the need for menstrual equity in an essay for Time last year.

The First Step Act mandates that tampons and pads be provided to inmates. That might not seem like a big deal, but it could lead to some really important reform. The U.S. has the highest incarceration rate for women of any country on the planet, which means that basic needs that people on the outside of the prison system may take for granted are actually really difficult to acquire for the 219,000 women who are currently incarcerated here.

The First Step Act is a signal from the federal government that the tide may be turning. “There’s been acknowledgment that our criminal justice system was not built with women’s needs and women’s bodies in mind,” explains Jennifer Weiss-Wolf, author of Periods Gone Public: Taking a Stand for Menstrual Equity, and Women and Democracy Fellow at the Brennan Center for Justice at NYU Law, in an interview with MarieClaire.com. “It wasn’t really until the 1990s that women started being swept into the criminal justice system with more frequency, really has a result of harsh drug laws, so we’ve had this crisis brewing for the past couple of decades where there are more and more women being incarcerated at quicker and quicker rates.”

Weiss-Wolf notes that its inclusion in the First Step Act is a “huge signal” that this issue has gained traction, but says that, like the name, this has to be just one step of many. “The language is rudimentary—it just requires that they be provided, which obviously requires some subjectivity on the part of the federal prison that’s going to be implementing it,” she says. “I would say that menstrual access provisions are a great first step, but it’s all about oversight and implementation.”

But just that simple mention can be powerful. Even though, according to a study by the Justice Action Network, 90 percent of voters agree that it’s necessary to provide menstrual products in prison, some state legislatures hesitate to pass period bills for women in prison. “What is meaningful about this federal reform is that the states often take their cue from what the federal government is doing,” Weiss-Wolf says. “When they see senators like Grassley and McConnell voting for this, and when they know President Trump is going to sign this, that gives them a lot more cover to push this kind of legislation.”

At a rally to shut down Rikers Island prison in 2017.
Andrew LichtensteinGetty Images

In other words, this is a really positive step in the right direction. In fact, though 2018 has seen some dire news where women’s healthcare access is concerned, from harsher abortion restrictions on the state level to a judge’s ruling that the Affordable Care Act is unconstitutional, there have also been some strides forward made in the realm of period equity. Weiss-Wolf points out that Nevada repealed its tampon tax by a vote this year, and three states—New York, Illinois, and California—have new rules on the books about providing period products to schools.

It’s a much-needed sign that the battle for healthcare access, especially for women, can still be won. 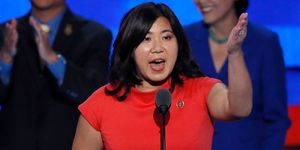 Our Laws Period-Shame Women—So I'm Changing Them
This content is created and maintained by a third party, and imported onto this page to help users provide their email addresses. You may be able to find more information about this and similar content at piano.io
Advertisement - Continue Reading Below
More From Politics
Moving Forward: We Need Better, Not 'Normal'
Could This Be the Last Year of Roe v. Wade?
Advertisement - Continue Reading Below
Meet the Next Presidential Pets, Major and Champ
Who Is Jen Psaki, Biden's Press Secretary?
Bernie Sanders at the Inauguration Is a Whole Mood
The Inaugural Concert Was a Cheesy Balm
Read VP Kamala Harris's Inauguration Speech
No, There Is No Inaugural Ball This Year
Kamala Harris Is "Momala" to Two Stepchildren
Read Amanda Gorman's Moving Inauguration Poem