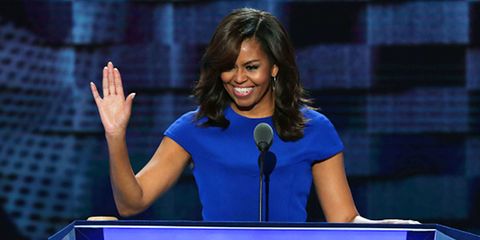 The first night of any convention is important. If it's a flop, the tone of the week is set (think about the kickoff that Scott Baio and Duck Dynasty's Willie Robertson gave at the Republican National Convention last week)—and any meaningful messages about the party and its future can be buried in headlines about fumbles and gaffes and awkward programming decisions.

Democrats went into the convention battling party strife of our own: Days before the convention, the chair of the Democratic National Committee, Debbie Wasserman Schultz, announced that she would be resigning following a controversy over leaked emails that exposed her bias against Bernie Sanders—puncturing any perception of perfect party unity. Then, it was announced that Wasserman Schultz would not even be speaking at the convention—another difficult development. Adding to this backdrop, Bernie Sanders' supporters were out in full force, many of whom were intent on disrupting convention proceedings and interrupting speeches.

"she spoke to the breadth of the American experience—both as a highly visible mother in the spotlight with two young daughters and as black American in a country that has struggled with race."

But then, Michelle Obama took the stage. In just under 15 minutes, she rallied the entire convention center into one equally moved bunch. She spoke to the breadth of the American experience—both as a highly visible mother in the spotlight with two young daughters and as black American in a country that has struggled with race. She was honest and uplifting. She stole the show.

There was, of course, a long and unpredictable road to get here. Hillary Clinton ran against Michelle's husband eight years ago, and no one should have taken for granted that she would support Clinton so publicly in this election cycle. It speaks to both of their characters—and their relationship—that they have each other's backs in this political climate. Amid all of the name-calling and insult trading these last few weeks, Michelle summed it up best when she said: "When they go low we go high." She focused her remarks not on attacking Donald Trump, but rather on praising Hillary's strengths. She didn't even say his name—that's how "high" she was to his "low."

The First Lady elevated a conversation that has been so often bogged down by Trump's knee-jerk remark du jour.

She has always had an ability to bring people together. No matter what issue she's worked on—from Let Girls Learn to the Let's Move initiative to fighting for veterans and their families—she has fought hard for results—and won them. Last night, she did it again.

Sam Vinograd is a political commentator and former government official who writes for MarieClaire.com's Opp-Ed column. Follow her on Twitter here.

Sam Vinograd Samantha Vinograd began her career as the Deputy U.S.
This content is created and maintained by a third party, and imported onto this page to help users provide their email addresses. You may be able to find more information about this and similar content at piano.io
Advertisement - Continue Reading Below
More From Politics
Moving Forward: We Need Better, Not 'Normal'
Could This Be the Last Year of Roe v. Wade?
Advertisement - Continue Reading Below
Meet the Next Presidential Pets, Major and Champ
Who Is Jen Psaki, Biden's Press Secretary?
Bernie Sanders at the Inauguration Is a Whole Mood
The Inaugural Concert Was a Cheesy Balm
Read VP Kamala Harris's Inauguration Speech
No, There Is No Inaugural Ball This Year
Kamala Harris Is "Momala" to Two Stepchildren
Read Amanda Gorman's Moving Inauguration Poem