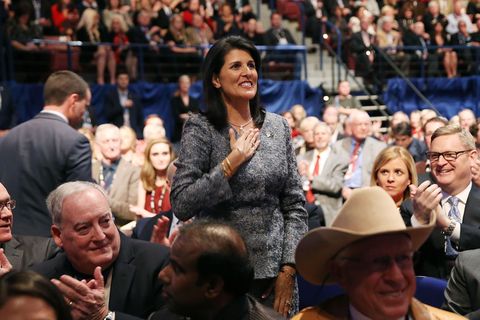 In November, Donald Trump named South Carolina Governor Nikki Haley as his pick for U.S. ambassador to the United Nations. She was the first woman and first person of color Trump chose for his administration. She was also a vocal opponent of Trump early in the primaries, making her an interesting and unexpected choice for the president-elect. Here's what you need to know about Haley.

1. She was the first woman and first person of color to be elected governor of South Carolina.

Haley has already been a trailblazer in politics. In addition to being the first woman and first minority elected governor of South Carolina, Haley, the daughter of immigrants, is the youngest currently-serving governor in the United States. Haley is the second Indian-American ever to be elected governor, after Bobby Jindal, who served as governor of Louisiana between 2008 and 2016.

2. She was raised Sikh, but converted to Christianity as an adult.

Haley was raised Sikh but converted to her husband, Michael Haley's faith. She attends United Methodist services now, but still participates in some cultural events related to her Sikh heritage. She even had two marriage ceremonies, one in a Methodist church and another in a Sikh gurdwara.

3. Before going into politics, Haley worked in business.

After graduating from Clemson University with an accounting degree, Haley ended up working for her mother's upscale clothing company, Exotica International. With Haley's help, Exotica grew to a multimillion-dollar company. She later served on the Orangeburg County Chamber of Commerce's board of directors and with the Lexington Chamber of Commerce. In 2004, she became president of the National Association of Women Business Owners. That same year, she began her life in politics with a run for a seat in the South Carolina House of Representatives, which she won.

4. Hillary Clinton inspired her to run for office.

In 2012, Haley discussed the obstacles women face entering politics. "Everybody was telling me why I shouldn't run: I was too young, I had small children, I should start at the school board level," she explained to theNew York Times. So what helped her stay motivated to dedicate her life to public service? Some inspirational words from none other than Hillary Clinton, that's what. "The reason I actually ran for office is because of Hillary Clinton," she said. "[Clinton] said that when it comes to women running for office, there will be everybody that tells you why you shouldn't but that's all the reasons why we need you to do it, and I walked out of there thinking 'That's it. I'm running for office.'"

5. She got elected as a tea party reformer.

Don't let Haley's inspirational connection to Hillary Clinton make you doubt her conservative views, though. The GOP rising star actually came to prominence as a Tea Party reformer when she was elected as governor in 2010. She's now seen a part of the GOP establishment, however, and is definitely no outsider.

6. She came to national prominence when she pushed for South Carolina to remove the Confederate flag from statehouse grounds.

Haley first received national attention in June 2015, after the racially-motivated church shooting in Charleston. At the time, South Carolina was still flying the Confederate flag on state grounds. Haley took a hard stance on the issue and pushed for the flag to be removed from state property. "On matters of race, South Carolina has had a tough history; we all know that. Many of us have seen it in our lives, in the lives of our parents and grandparents. We don't need reminders," she said. She was successful, and the flag came down. The victory earned Haley national praise and recognition.

7. She's been buzzed about as a potential VP or even presidential candidate for the GOP.

Haley's nomination may have been a bit surprising under Trump's administration, but the fact that she's stepping up to the national political stage is not surprising at all. Since Haley was elected governor in 2010, there's been buzz about her as a possible vice presidential or even presidential nominee, since she represents a younger, more diverse direction some Republicans see as the future of the party.

8. But she had zero interest in becoming Trump's vice president.

In spite of buzz that she would make a good vice presidential nominee, Haley said publicly that she wasn't interested in running alongside Trump. "I have great respect for the will of the people, and as I have always said, I will support the Republican nominee for president," Haley told the Charleston Post and Courier in May. "To the members of the press who are asking, while I am flattered to be mentioned and proud of what that says about the great things going on in South Carolina, my plate is full and I am not interested in serving as vice president."

9. She campaigned against Trump in the primaries.

Though Haley did eventually support Trump's nomination, she initially backed not just one, but two of his competitors. She was an early supporter of Florida Senator Marco Rubio. And when Rubio withdrew, Haley shifted her support to Texas Senator Ted Cruz.

Eventually, in October, she did publicly vow to vote for Trump and urged her constituents to do the same, but her endorsement wasn't exactly a ringing one. "That doesn't mean it's an easy vote," she said at a news conference. "But it does mean that I'm watching out for the people of South Carolina and I'm watching out for the people of this country, and that's who I will be voting for on November 8."

10. Her speech after Obama's 2016 State of the Union was seen as a criticism of Trump.

After President Obama's 2016 State of the Union address in January, Haley delivered the Republican response and parts of her speech were seen as loosely-veiled criticisms of Trump, who at the time was campaigning in the primaries. "During anxious times, it can be tempting to follow the siren call of the angriest voices," she said. "We must resist that temptation."

11. Trump has criticized her, too.

Unsurprisingly, Trump didn't let Haley's many public criticisms go unanswered. The president-elect aired his grievances against her on Twitter, as he does.

Haley stood her ground though, and replied on Twitter in the most Southern way possible.

12. She has a mixed record when it comes to the global refugee crisis.

Since Haley will soon be representing the United States on the global stage, it's important to know where she stands on important international issues. Though her limited experience in this area means we don't necessarily know her take on many key international issues, one issue on which she does have a public record is the refugee crisis.

13. She has no extensive international experience, but people are confident she can do the job.

Although Haley has participated in some trade delegations as governor (which have, by most accounts, gone well), she lacks substantive international political experience, making her an odd choice for U.N. ambassador. She's reportedly rarely even traveled abroad. In spite of her limited experience, those who have worked closely with Haley say she's a fast learner and good communicator who will ultimately be successful as U.N. ambassador.

"She is very qualified," David Wilkins, a South Carolina attorney who was the U.S. ambassador to Canada under George W. Bush, said of Haley. "She's a quick study. She's smart. She's got good people skills. She's a very good communicator. She's dealt with officials. She's handled crises. All those skills she honed as a governor are very transferable."

Kayleigh Roberts Kayleigh Roberts is the weekend editor at Marie Claire, covering celebrity and entertainment news, from actual royals like Kate Middleton and Meghan Markle to Hollywood royalty, like Katie Holmes and Chrissy Teigen.
This content is created and maintained by a third party, and imported onto this page to help users provide their email addresses. You may be able to find more information about this and similar content at piano.io
Advertisement - Continue Reading Below
More From Politics
Kristin Urquiza Wants Justice for COVID-19 Victims
A Breakdown of VP Harris's Net Worth
Advertisement - Continue Reading Below
WH Announces Removal of the Hyde Amendment
What Liberation Means This Juneteenth
Kathryn Garcia: It's Time to Step Up or Shut Up
A Valedictorian Speaks Out Against Abortion Bans
Standing Between Care and Violence
Seeking Healing a Century After the Tulsa Massacre
What to Know about Texas's Abortion "Trigger Ban"
A New Book Invites Us to Rethink Menstrual Equity