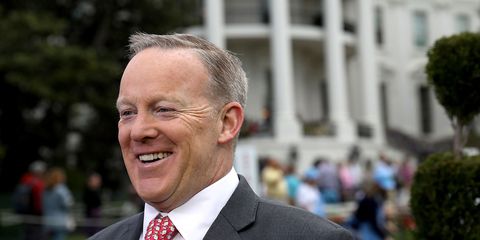 If you've seen Melissa McCarthy's impression of Sean Spicer on Saturday Night Live, you know that it's...erm, not flattering.

Even before the Trump's first White House Easter Egg Roll took place on Monday, McCarthy donned Spicer's beloved Easter Bunny outfit (which he wore during an egg roll under the Bush administration) in yet another viral SNL skit on Saturday. Again, it was not terribly flattering.

So, the big question is: what does Spicer himself think of the impression, especially given that he doesn't seem to have a high tolerance for endless mocking or, you know, any patience for anything at all?

CNN's Jim Acosta got to ask him this very question on Monday (which, by the way, is *already* awkward given Trump's tirades on how CNN is "fake news"), and his response was super cringe-worthy:

Acosta then asks, point blank, "What do you think about when you see Melissa McCarthy doing these skits?"

Spicer says, "I'm usually fast asleep by the time that comes on...I'm in bed, get up, go to church the next day, and look ahead." For the record, SNL airs at 11:30 EST on Saturday nights.

Acosta, bless him, pushes him, saying, "But you have fun with it right? I mean you enjoy it," at which point Spicer's facial expression becomes the embodiment of internal screaming.

He responds with some vague comments about how we live in a great country where the First Amendment lets people to and say what they want, but what is his face saying, really?

Acosta then tries to diffuse the tension a bit by saying he gets made fun of too, at which point Spicer sneaks in a mild burn, followed by the kind of fake laugh often found between two dads at a barbecue when one has hit on the other one's wife.

I look forward to watching these two compete at the Passive Aggressive Olympics. 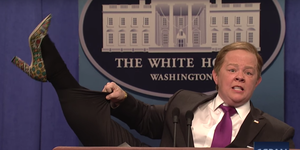