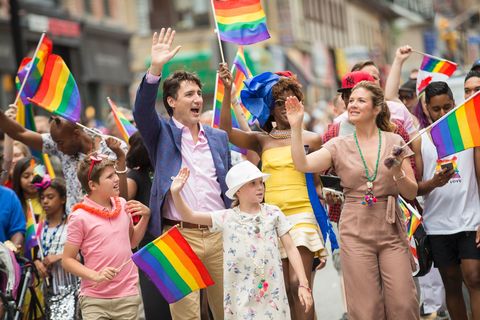 Canadian Prime Minister Justin Trudeau just keeps making us jealous. In the month of June alone, he has grabbed dinner with President Obama, casually kayaked up to his constituents, and hugged a puppet unicorn. And now, for the second time in his term, he happily marched in Toronto's Pride parade.

On Sunday, he marched alongside his wife, Sophie Grégoire Trudeau, and their kids, Xavier and Ella-Grace. Last year, according to the Toronto Star, he became the first sitting prime minister to march in the parade, and this year it was even better. He sported a rainbow maple leaf on his cheek, and even gave a big hug to a spectator who wore a shirt covered in pictures of the prime minister.

And if that weren't awesome enough, he stopped to give a high-five to a girl in a Wonder Woman crown.

Wonder Woman is on site for #Prideto #toronto @PrideToronto pic.twitter.com/t4cWuKZlMG

"We celebrate the multiple layers of identities that make Canada extraordinary and strong and today we celebrate with the entire LGBT2Q community," he said, referring to the First Nations term of "two-spirited." "Happy Pride for everyone! Happy Pride Toronto!"

Sigh. Why can't we have nice things like this in the United States?