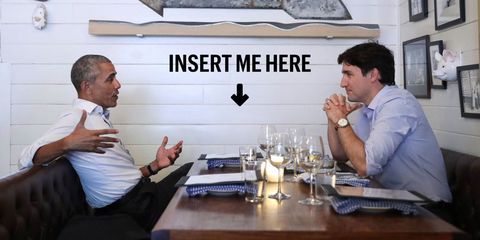 On Tuesday, Canadian Prime Minister and Global Favorite Human Justin Trudeau took time out of his busy kayaking schedule to have a dinner date with another painfully cool politician. He and President Obama had massive crowds lining the streets of Montreal and the entirety of the internet melting down, but hey, that's a typical day for these two.

Tonight in Montreal, @BarackObama and @JustinTrudeau discussed their shared commitment to developing the next generation of leaders. pic.twitter.com/170ze83igl

Obama was in town to give a speech to a crowd of 6,000 people at the Montreal Chamber of Commerce. During the speech, Obama took a page from Michelle and trashed Trump without ever saying his name, citing a "temporary absence of American leadership" and praising U.S. mayors and governors for upholding the Paris climate change agreement on their own.

All that Trump talk can get you hungry, so afterward, he and Trudeau sat down for a bite to eat. They went to the St-Henri neighborhood spot Liverpool House, according to the Montreal Gazette, and people lined up on both sides of the street to try to get a glimpse. After a few hours, they emerged from the restaurant to cheers.

Obama: "What do you recommend?"

Trudeau: "I hear the covfefe is pretty good" pic.twitter.com/aGUgmZdBns

Nice to see Obama, Trudeau and Trump are able to sit down over a meal and discuss world events! pic.twitter.com/4nAXc9L0tF

Both of them tweeted photos from their dinner date, and honestly it's so rude to not invite us even though there was plenty of room in the booth.

How do we get young leaders to take action in their communities? Thanks @BarackObama for your visit & insights tonight in my hometown. pic.twitter.com/EwJXPEkN3w