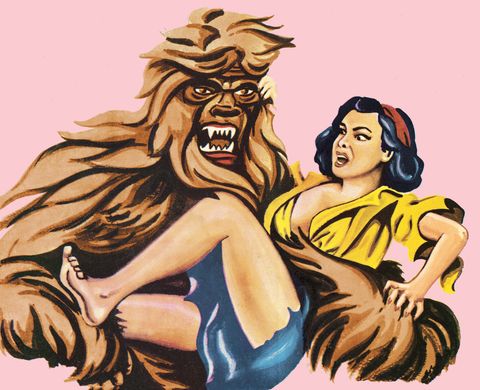 On Sunday evening, the term “Bigfoot erotica” began trending and, because it’s 2018, if your money was on “this has to do with our current political climate,” you were the night’s big winner. It started when Leslie Cockburn, a congressional candidate for Virginia’s 5th district, tweeted the following about her opponent, the GOP pick Denver Riggleman.

"My opponent Denver Riggleman, running mate of Corey Stewart, was caught on camera campaigning with a white supremacist. Now he has been exposed as a devotee of Bigfoot erotica. This is not what we need on Capitol Hill."

My opponent Denver Riggleman, running mate of Corey Stewart, was caught on camera campaigning with a white supremacist. Now he has been exposed as a devotee of Bigfoot erotica. This is not what we need on Capitol Hill. pic.twitter.com/0eBvxFd6sG

But within minutes, the differing opinions came and came (just like Bigfoot would if—you get the idea):

From my perspective, anyone who is white supremacist-adjacent should not be listened to ever again, but being into niche erotica shouldn’t be a disqualifying factor in public life. As such, MarieClaire.com would be remiss not to take advantage of this teachable moment and go deep on the subject.

Here are some commonly-asked questions (...I assume) about Bigfoot erotica:

What is Bigfoot erotica?

Does Harry and the Hendersons count as Bigfoot erotica?

I think so, but it probably depends on how you feel about John Lithgow.

Well, that show Finding Bigfoot has been on for like seven years. If they had anything conclusive don’t you think it’d be bigger news?

But the Sasquatch Research Association (they’re a dot-org!!) is dedicated to searching for the truth and even has a whole page where you can report sightings. The most recent encounter is dated 2009, and comes from a self-described skeptic who became a believer when he came face-to-face with a ‘Squatch named Big Phil.

Why would someone theoretically be attracted to Bigfoot?

To answer this question, I turned to prolific author Chuck Tingle, creator of such titles as Seduced by Doctor Bigfoot: Attorney at Law and Bigfoot Pirates Haunt My Balls. He's basically the John Nash of Sasquatch erotica.

He continued, “But there is another side to Bigfoot that is kind and gentle, where he can teach you about the ways of the woods and show you which flowers to pick if you want to make a nice bundle to take home and put in a vase. So Bigfeet are sensitive in this way and I think that is very important for getting hard as a rock.”

I asked Dr. Kristie Overstreet, clinical sexologist and psychotherapist, about where Bigfoot fetishes fit. "Monster erotica, which includes sexual behavior between humans and monsters or creatures, is very popular," she tells MarieClaire.com. "Mythical creatures are based on our imagination and creation in our minds, which makes them even more stimulating. Whether it's Bigfoot, a merman, or the fish creature from The Shape of Water, many people find the thought of sex with these creatures highly erotic." She also says that wanting to do it with Sasquatch is a normal fantasy, and not something you should be ashamed of. "Bestiality is the act of a human having sex with a nonhuman animal," she says. "Monster erotica isn't the same thing."

Ultimately, says Dr. Overstreet, "There is nothing wrong with having a fetish. Start by accepting that you know what you like and what turns you on. Don't beat yourself up or feel guilty about it."

But do feel guilty if you're cool with white supremacy.

What does Chuck Tingle think about this news story?

Tingle says: “I would like to live in a timeline where preferred pound is not part of a political campaign discussion; where we can look at a candidate and say, ‘I do not think voting for them is appropriate because they are racist or homophobic’—not because they have a unique pound. I do not think we should talk about what gets people hard in a political way because that is not fair to equate.”

Let this be the final word on the subject.

Are there healthy ways to explore my own Bigfoot attraction?

Of course! Like any fetish, the key to enjoying it is to find ways to express it that make you feel good without causing harm. Reading erotica is a great way to do this, so might I recommend Chuck Tingle's Amazon page?

According to certified sex coach and writer Gigi Engle, you could also incorporate this fantasy into your actual sex life. "Have your partner wear a gorilla mask, if they're up for it," she says. "They can pretend not to speak a language and do a whole Bigfoot role-play."

So that’s the deal with Bigfoot erotica! Make sure you're registered to vote in the upcoming midterms and enjoy your kinks responsibly.