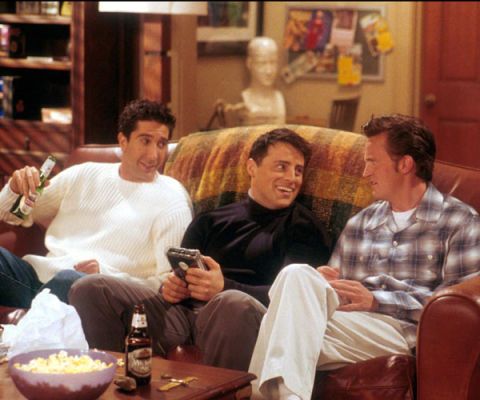 Who he is: It's like some guys just can't turn it off. Even though it's pretty darn obvious you're taken—um, hello, you're dating his pal—he routinely turns his charms on you.

How to handle: If it's clearly harmless (i.e. he treats the grandmother-age waitress the same as you), then chalk it up to it just being him. If it makes you feel uncomfortable, bring it up with him in a casual manner. If something in your gut makes your worry, consider bringing it up with your guy: Could it mean he's insinuated you guys aren't that serious?

Who he is: The single guy who's always begging for a wingman.

How to handle: This one depends a lot on your guy and the trust level between you both. Keeping him from partying with the buddy could end up causing unneeded tension, but before he does go out, make sure you've had a talk about what is and isn't okay. Chatting with girls while his friend flirts? Sure. Grinding on the dance floor to drunk in love? Probably not.

Who he is: He hasn't had any friends that are girls, ever, and in his mind, you might as well exist on different planets.

How to handle: You should both be civil and able to coexist, but just like with everyone else, there are some people you just can't be friends with. Don't spend any undue time stressing over it and let him hang out with your man on their own time (you can also use it as a handy excuse to grab girls-only drinks).

Who he is: He might be one of your guy's oldest friends, but they took divergent paths at some point, with the pal liking to party in excess and seemingly allergic to responsibility.

How to handle: Everyone knows there's something special about old friends, but if the friend's bad news, cutting ties is probably important. Don't let it turn into a blowout, but schedule some time to present your feelings to your significant other. Whether it's drugs or drinking, it might be a good chance for him to explain that until he gets the help he needs, they can't be hanging out.

Who he is: Every guy group has one person they've all unanimously decided is hilarious (even if you don't quite see it).

How to handle: Don't question it. Everyone has a different sense of humor, so just accept that the jokes your boyfriend dies over, fall flat to you. Find amusement in how tickled your man gets over it and don't try to fake laughter: it likely reads worse than a polite smile where appropriate.

Who he is: He's funny, kind, and a great addition to any get-together.

How to handle: A wonderful side effect of a relationship is the new friends you get in the process. Enjoy having him around!


Not All Women Are Crazy and Not All Men Are Dicks


The Worst Ways To Break Up With Someone


Reasons To Have More Sex


This Map Shows You Where The Best (And Worst) Guys Live