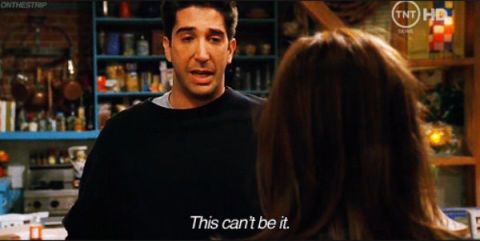 This morning, I woke up mad at my girlfriend. I did something many people tend to do: mistake a bad dream I was having for reality. In this case, I dreamt my girlfriend and I were on a trip to Italy and she turned to me upon arrival and abruptly said, "You know what? I fell out of love with you. We're over." When I woke up, I turned to her and said, "That is no way to end things with someone." What exactly is a good way? Here are a few tips on how to manage a breakup.

Do It at His Place

The location of a breakup is key. Assuming you've been dating for more than six weeks, an in-person breakup is kinder and (dare I say?) necessary. The gent deserves the chance to look you in the eye and see that you aren't being casual about ending things.

Now, he may have fallen for you. So you can't assume he will handle the breakup without an argument, a scene, or even tears. Don't make him cry at a restaurant. You wouldn't like that, so don't do that to him. Leave the public locations alone. You could have him over to your place, but that has a feeling equivalent to being called into the boss's office to be fired.

The rule of thumb for breaking up is: If you're the one doing the ending, you should do it at the other person's place so you can leave immediately after. Then the other party can stay at home and wallow in private or immediately go out and do whatever it is they habitually do when hurt.

Don't do it right after a family member of his dies. Don't do it after he gets fired. Don't do it right after he tells you he loves you for the first time. There is a lengthy list of "don'ts," so maybe the easiest thing is for me to just give you the best time to do it: early evening (so that if he wants to get a drink after, it's socially acceptable and his friends will be out), while sober (no drunk arguments please), and in between relationship milestones/major life crises. In other words, you're not pouring salt on any existing wounds he's struggling with, he's in a clear state of mind, and it's not a stressful or busy time of day.

Don't pull that old "It's not you, it's me" garbage. If there's a specific reason you're breaking up, state it clearly and don't waver. Saying you can't trust him because he cheated or has been seeing someone else are all very understandable reasons to break up. State your reason and be done with it.

If the reason you're breaking up is more vague, here's a message that is clear enough and has been very well-received by guys: "I hate to say this, but I need to do my own thing right now. It's just not the right time for me to commit to a relationship." This is not "you're not right for me" or "I can't be with you because I'm a mess." It's a timing issue and you not wanting to be in a relationship. A guy gets that.

Here's another, more verbose good one, especially if you're dating someone else instead: "Since we both feel it's important to be honest, I want to let you know I met someone last month before we started seeing each other regularly. I think you're wonderful and special, but timing just wasn't on our side. Your only flaw is that I met him first." I have a friend who uses a variation of this line and has gotten the best possible responses from men. It's saying you value him as a person and his qualities but that the timing wasn't meant to be.

You can't take responsibility for another person's reactions when you break up, but you can try to let him down as gently as possible. Good luck!


8 Real Reasons He Broke Up with You


The 10 Worst Ways to breakup With Someone


The Best of Breakup Apps