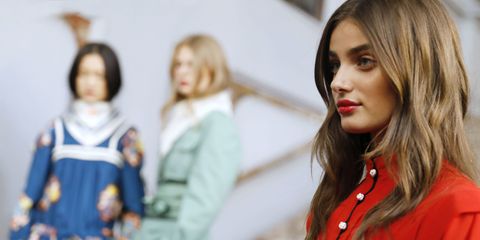 With the jumble-y algorithm and newfangled nine-grid—when all the people want is for their feeds to be arranged chronologically, please!—it takes a special image indeed to stand out in the double-speed fast-forward of Instagram. That might explain the feathery/wavy/reverse/every-which-way eyebrows of the past few months, but as seen as Milan Fashion Week, maybe the craftiest like-trap isn't designed to shock at all.

As this reporter was flicking through Insta fast enough to dislocate a baby-boomer's thumb, one relatively quiet picture was enough put the brakes on. (Note the lack of stunt makeup and nipples.)

That's it—"just" maddeningly pretty hair and juicy lipstick that looks too simple to bely the amount of work that was put into it. (All girls know better.)

But from stylist extraordinaire Sam McKnight's notes, we can hypothesize that the slightly ropey but shiny but not blown-out-perfect hair was diffused using the ultra-quiet Dyson dryer, then wrapped loosely around an iron and held for less than the count of three. Result: bendy texture that could've grown out of your head that way.

Tom Pecheux has proven less forthcoming about the makeup, but maybe because there's not much more to be said than, "Everything I ned to know, I can see right in the picture." Brows seemed to be brushed up and filled in, skin perfected, and lip stains in different merlot-to-watermelon pinks and red patted on, then moistened with a glossy top coat.

Weird that this is what stopped us in our tracks in the age of shock value, but nice to know that pure pretty can still turn heads.