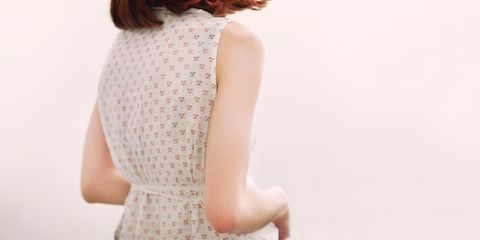 I’ve had keratosis pilaris—i.e. the bumpy “chicken skin” most commonly found on the backs of your arms, cheeks, and thighs—my entire life. “She’ll grow out of it,” dermatologists told my mom, but puberty came and went, and little ol’ me continued to wear cardigans to school in 90-degree heat because I was so embarrassed by my rough, red, blotchy arms.

Fast forward to a decade later, and adult ol’ me is...still dealing with KP. “But where’s the happy ending?!” I hear you cry. Yeah, well, sorry to burst your bubble, but there are no real “cures” when it comes to KP, because it’s something that’s simply part of your DNA. “Keratosis pilaris is a common genetic skin condition that’s caused by a buildup of keratin in the hair follicle, forming rough, hard plugs that can look inflamed and red,” says Melissa Kanchanapoomi Levin, MD, dermatologist and clinical attending at NYU Langone and Mount Sinai Hospital in NYC. Fun, right?

But despite the fact that it occurs in about half of all adults, there’s still no tried-and-true treatment that works for everyone. And trust me; I have tried every possible “cure” a 14-year-old with unlimited internet access could try. I spent six months oil pulling when I was 15, a year dry brushing my entire body when I was 16, and the better part of my teenage years diligently slathering my arms—and cheeks and chin and thighs, because KP knows no bounds—with coconut oil twice a day, every single damn day.

And despite all of the potions and prayers, I never found a cure (though I often made it way, way worse, like when I scrubbed the crap out of my skin for a month). I did, however, discover a ton of really excellent treatments that have either completely cut the redness, smoothed the bumps, or done a bit of both. So to prevent you from either destroying your skin or your sanity, I present to you the only products that have ever really helped my keratosis pilaris, in hopes that one of them might just help you.

What a sexy, sexy product, huh? Welp, what it lacks in bells-and-whistles packaging, it makes up for with a legit combo of ingredients: three-percent salicylic acid and 10-percent colloidal sulfur. “Topical sulfur is a known keratolytic agent, which means it breaks up the bonds in keratin plugs, helping shed them away,” says Dr. Levin. And, when combined with salicylic acid, another keratolytic ingredient with anti-inflammatory properties, you’ve got a gentle, yet really effective solution for KP (and also acne, which is an extra bonus).

Plus, if you do it the way I do, which is by rubbing the actual bar over my arms and thighs, you get the added perk of a gentle exfoliation, which can help loosen plugs without irritating them. Just be warned: This soap is unscented, so it will smell like sulfur in your shower for a few minutes. But thankfully, the smell dissipates from your skin as soon as you dry off. You can also try sulfur-infused face washes, though, in my experience, they’ve been too drying and irritating for my sensitive skin (yes, even my legs and arms), so I stick with the bar, instead.

There’s a reason why this is the cream you see over and over again in your search results for “how to fix keratosis pilaris”: It really works. But only if you use it consistently—like so, so consistently. I’ve thrown away and rebought this lotion a dozen times, always convinced it doesn’t work for me, and always convinced I should try it again.

So finally, last year, I made a promise to apply it every single night for a month straight, without skipping a day, and what do you know? My KP decreased by a good 70 percent. Which shouldn’t have been that surprising, considering it’s filled with lactic acid (i.e. a sugar-derived alpha hydroxy acid, or AHA) that not only hardcore moisturizes skin, but also dissolves keratin bonds for way fewer bumps. You just need to stick with it—I took a weekend off and my KP came back 100 percent, as if I had never applied it all. Yes, it’s slightly sticky, and it stings like hell for a minute if you have any open cuts, and it doesn’t smell great, but it really does work.

I actually hadn’t intended to use this one for my KP—I had a group of retinol oils (which are way more gentle and soothing than usual retinol treatments) sitting in my cabinet after testing them for a story, and, on a whim, started slathering them on my arms. If retinol is good for your wrinkles, dark spots, acne, and literally every other skin issue, it’s gotta be good for your keratosis pilaris, right? And, as it turns out, it was.

“Vitamin-A derivatives such as retinols and retinoids speed up your skin cell turnover, which prevents buildup of skin cells and, in turn, keratin, in the first place,” says Dr. Levin. Technically, acids, like AHAs and BHAs, are still the quickest, most effective way of dealing with KP, but because everyone’s skin is different, they may not work for you at all, whereas retinol could be your game-changer.

Related Stories
Surprise: Face Mist Might Be Bad for Your Skin
Here's The Truth Behind Skin-Fixing Supplements

For me, I noticed an all-over improvement in my arms and thighs after a few weeks of diligent, every-other-day use; both the bumps and redness had decreased, rather than a one-or-the-other situation I experienced with the lotion and soap. Annoyingly, though, it’s a rather expensive method, since retinol oils tend to be so pricey, so I haven’t really kept up with this method. However, if you don’t have especially sensitive skin, you could easily get a generic retinol cream, like this $20 Amazon favorite, which has more than 2,000 glowing reviews and would definitely get you similar results.

And that’s it. Yup, a lifetime of KP-cure testing, and only three products have been deemed worthy for my skin. Of course, your mileage may vary, and maybe a cult-favorite cream like DermaDoctor’s KP Duty Lotion will work for you (for me, the combination of glycolic acid and urea made my skin itch, and it was too expensive to keep re-buying every four weeks), or some other DIY potion on the internet (as long it doesn’t include excessive scrubbing, or baking soda or lemon or apple cider vinegar, which I promise you will truly ruin your skin).

Regardless of what you end up trying, though, make sure you use in conjunction with sunscreen, as all acids make your skin sensitive to the light, which can cause intense burning and skin damage. But other than that, please, for the love of your sanity, get slathering.

Related Story
Can This DNA Test Get Rid of Your Wrinkles?
Chloe Metzger Deputy Beauty Director Chloe Metzger is the deputy beauty director at Cosmopolitan, obsessively writing about new makeup launches, the best hair products (curly girl here; whattup), and the skincare formulas that really work for every skin type (follow her on Instagram to see behind-the-scenes pics of that magazine life).
Advertisement - Continue Reading Below
More From Skin Care Tips for Any Skin Type
Editors' Picks: Face Rollers That Work
The Best Eye Creams for Getting Rid of Puffy Bags
Advertisement - Continue Reading Below
Is Olive Oil the Key to Ridiculously Good Skin?
The 10 Best At-Home Laser Hair Removal Devices
Beauty Mavens Share Their Skincare Spreadsheets
Niche Skincare for Your Niche Skin Needs
Five Staffers Test Cult-Favorite Skincare Products
The Great Skincare Reset
Why Face Oil Will Give You the Best Skin Ever
Tools for Picking Your Skin the Right Way