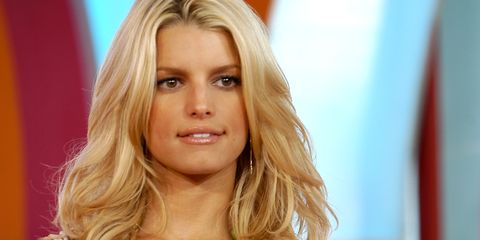 Oh, Jessica Simpson—how you represent my entire childhood. Let us all remember your deeply moving “I Wanna Love You Forever” music video, your painfully real Newlyweds series (no, tuna fish is still not chicken), and, of course, your iconic blonde waves that spurred a decade of copycat hairstyles.

But in a recent photo posted by the singer-slash-actress, Jessica Simpson no longer looks like Jessica Simpson, thanks to a new look of long red hair and baby bangs. Please collect yourself.

Simpson celebrated her 38th birthday this week (yes, you officially feel old now) and rang her the new year with a low-key birthday party she documented on her Instagram. But if you scrolled too quickly through your feed, you might have missed it, because absent from the photos of the night was Simpson’s signature blonde hair. Which, to my inner 10-year-old, means Jessica Simpson was also absent from the photos.

Instead, she opted for Ariel-meets-Vitamin C waves that reached down to her butt, and a textured crop of micro-bangs. She paired the whole look with thickly lined eyes, peach eyeshadow, fake lashes, and plumped-up lips. Comments of “Pretty girl,” “Soooo gorgeous,” and “beautiful hair,” litter the photo she posted to Instagram (which she captioned “Sultry 38”), but other fans weren’t as into it.

But Is it Real?

“Don’t like the red hair, it looks Dorothy from Oz,” reads one comment, while another user writes, “Not your best color.” Gotta love the internet, right? Welp, it doesn’t really matter what the haters think—mainly because Simpson is an autonomous human being who can do whatever TF she wants to do, but also because Simpson’s hair isn’t real.

Despite the fierce debate and criticism happening in the comments section of her photo, Simpson’s peachy hair is clearly just a wig, put on for a night of birthday fun. Though she hasn’t officially confirmed or denied it (but, like, why would she?), it doesn’t matter—I’m still feeling this fresh shade on her. After all, rose-gold hair is the biggest trend this year, right?