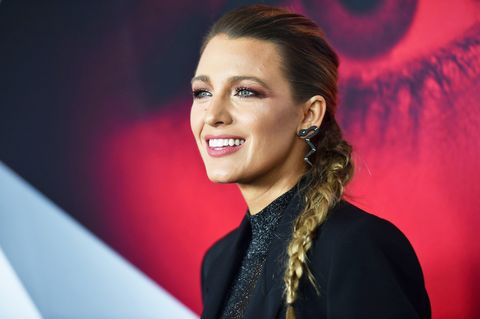 At the premiere for her new movie A Simple Favor, Blake Lively's latest nail art look made clear that she has a keen eye for detail. While you're marveling at her outfit, you might have missed a thing or two–like a martini glass accent on her fingernail, which PopSugar caught.

Stepping out onto the red carpet alongside husband Ryan Reynolds and co-stars Anna Kendrick and Henry Golding for the film's premiere Monday night (September 10), Lively stunned in a sharply tailored black matte Givenchy suit with glitter coattails. But that's not all. Lively, who has a history of matching her nails to her outfit, added a Swarovski crystal martini glass to her left ring finger/accent nail—an homage to the film itself, where a martini glass is a recurring symbol.

The attention to detail is astounding, and Lively worked with celebrity nail artist Elle to achieve the dashing look. The surrounding nails–as in, the ones not martini-fied–were first painted in a layer of base coat from LeChat Nails, followed by Lively's pick, LeChat Nails' Dare to Wear Lacquers in Rock the Mic, a shimmering black to match with Blake's black blouse. The nails were then topped with LeChat Nails' top coat.

For the accent nail, Elle used LeChat Nails' Dare to Wear in Black Velvet, a creamy black, and crafted the martini glass from Swarovski crystals soaked in polish and let dry for best application. Oh, and the polishes Blake used? Only $7.

Whether you're a martini-drinker or not, you can definitely appreciate this nail look. 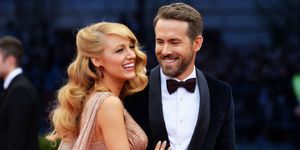 This Is How Blake Lively Won Ryan Reynolds' Heart
Ryan Reynolds Takes Trolling Blake to New Levels
Amanda Mitchell Amanda Mitchell is a writer, podcaster, and a walking, talking exclamation point.
Advertisement - Continue Reading Below
More From Beauty
The Body Lotion Your Dry Skin Has Been Craving
Know the Signs That Your Makeup Has Expired
Advertisement - Continue Reading Below
Kendall Jenner Has Rapunzel Hair On 'Garage' Cover
WORTH IT: Royal Fern Skin Perfecting Essence
Blonde vs. Brunette: Celebs Who Made the Switch
My Top 3 Favorite Lipsticks Right Now
Khloé Kardashian's New "Bronde" Bob Is a Moment
The Teeth Whiteners I’ve Tried and Loved
The Must-Have Products for Air-Drying Your Hair
16 Super Pretty Valentine's Day Makeup Tutorials