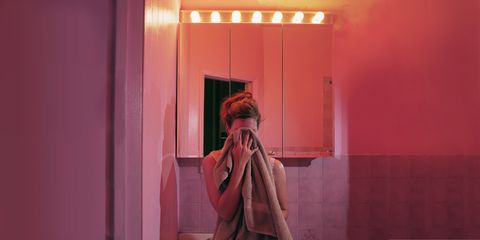 You may remember Narcissus, the Greek mythological character who fell in love with his own reflection and eventually killed himself because it would never love him back. But...what if the guy was just obsessing over his pores?

That's why I spend an extra half-hour staring in the mirror every day, after all. And yes, I literally mean 30 minutes, an inch from the glass, trying to get a look at the skin next to my earlobe to make sure an acne garden didn't crop up over night. My pore ritual is just the beginning: Throughout the day, I quickly glancing at bathroom mirrors and high-shine Manhattan surfaces. These are not self-congratulatory damn-girl-you-look-great check-ins. Quite the opposite: Unlike Narcissus, I am not in love with what I see.

Peering into the subway glass that goes dark between stops, I catch myself in 20-second fragments, enough time to confirm that nothing has shifted, fallen, or wrinkled since the last time I looked. I am not vain; I'm afraid of who might stare back—and it's exhausting.

Which is why I decided to embark on a little experiment and see if I couldn't shake some of that fear: One week. No mirrors.

Easier said than done. I put it off for nearly a month, making excuses about how I wanted to look "like myself" for important meetings or plans with friends. I eventually bit the bullet—on Valentine's Day, no less. My boyfriend, like most men, expresses a preference for "no makeup" (when what he actually means is "natural makeup"), so I figured it was as good a time as any to kick things off.

I laid a couple of ground rules: I could take a quick look first thing in the morning, for no more than 30 seconds (I literally set a timer) and had to stand at least a foot away from the mirror. And that was it, until the following Friday.

Turns out, day one wasn't too bad: We stayed in and cooked dinner, so I didn't feel self-conscious about being the only woman in a restaurant without a lick of makeup (and since my guy isn't a vanity gremlin, avoiding mirrors at his place is pretty easy). But I did find myself resisting the urge to pop into the bathroom and "check" on my hair, my skin, my pre-lingerie look (it was V-Day, after all). Luckily, he's pretty good at making me feel beautiful, so I sort of forgot I was performing an experiment at all.

Until the next morning, that is, when I hit the gym. It's ostensibly helpful to have mirrors around to make sure your weight-lifting form is in tip-top shape, but really, whether you're doing squats, on an elliptical, in yoga or spin class, you're really looking to confirm that you don't look ridiculous—and maybe even that you look just as good as everyone around you. There's implicit competition, fueled by mirrors, and avoiding your own reflection (even just in the television screen attached to the treadmill) is next to impossible. On the way home I caught an accidental glimpse of myself in a taxi window: cheeks red, hair out of control, a V of sweat down my T-shirt. Back at my apartment, I had to throw a towel over the bathroom vanity when I hopped in the shower.

I am not vain; I'm afraid of who might stare back—and it's exhausting.

Monday morning proved to be a little trickier—as a freelance writer, I spend a fair amount of time at home on my own, typing away on the computer (and, if we're being really honest, sometimes in pajamas while wearing a face mask). But this particular week was stacked with meetings and evenings plans, which was awesome but also mildly daunting due a painful volcanic zit I could feel boiling under the surface of my jawline (thank you winter skin issues). I did my best to conceal and blend in 30-seconds before leaving my reflection behind for the day. Amazingly, I discovered that, if I wasn't looking for it, the zit basically wasn't there. Behold: That is the magic of not looking in mirrors.

But even after becoming privy to the magic, avoidance of oneself during the day isn't easy. Our subtle, shadowed reflections are everywhere, from the revolving door at the office to the glass inside the shower at the gym. What's more: The view of our own faces and bodies often gets in the way of what we should really be looking at. If you've ever spent a Facetime chat with a friend checking out your own under eye circles, then you know exactly what I mean. And while, at first glance, this type of behavior looks and acts like vanity, the truth is that it's a reflection of how insecure we feel about the self we show to the world—and a hope-beyond-hope that when we look in the mirror, it will reflect what we want to see.

The hardest moment, somewhat ironically, was during yoga class, a place where you're supposed to abandon self-judgement and just focus on your breathing and movements. Surrounded by mirrors on all sides, I felt trapped—and, since I'd gone several days without looking at myself, neurotically fearful that my body would be somehow different after escaping my fretful gaze. Twenty minutes into class, I realized I was more worried about seeing extra pudge on my own stomach than grateful for the opportunity to break for yoga mid-day. That epiphany opened my eyes. I quickly slipped my contacts out and spent the remainder of class in a foggy, blissful haze.

Volcano zit aside, the rest of the week went by relatively easily. I came to realize that my mirror check-in habits were easily replaced by a deep breath in and, from time to, the out-loud repetition of "I am fine." And I really was. Not only did no-mirror time give me a week to reflect on how I had slowly become so dependent on the looking glass, but it gave me permission to ask myself what was going on on a level I can't see on the surface.

The following Saturday, I took my first long, hard look in the mirror. You know what? My pores looked smaller than ever.

You Know Those Awful Underground Pimples? I Found the Perfect Cure