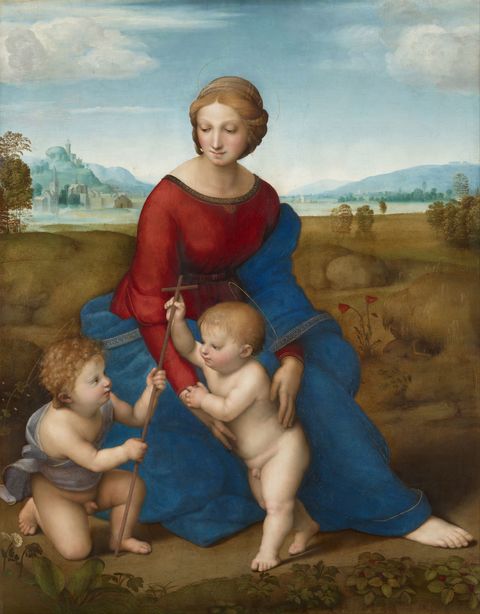 'Madonna in the Meadow,' Raphael

I'm about to make you regret not majoring in art history in college, because sure, you were able to get a job after school, but you missed out on something pretty great.

No, I don't mean the joy that is staring at heart-stoppingly brilliant stuff someone made a long, long time ago and having feelings about it. Or the fact that you're required to visit museums. It's more about the fact that all those portraits you've seen eventually seep into your subconscious and, one day when you're an internet scribe, you realize, "Hey, those Renaissance babes all had Cate Blanchett's SK-II skin!"

There is no better woman than Dior's famed international makeup designer Violette—a fellow art nerd (she legit studied painting, guys)—to give us all some advice on how to achieve that pure, rosy, never-been-outside complexion. Can you tell how excited I am for this? *lights off* *projector on*

Okay, we're about to get a bit technical here, but the payoff's worth it, you'll see. Two terms to know:

"sfumato," which is the sort of well-blended smokiness Leonardo da Vinci often used, and "chiaroscuro," which is the contrast between light and dark. Obviously, both are important when you're contouring in a subtle, non-Kardashian way with the objective of creating more balance between the features—not completely obliterating them.

For a round face, apply a shadow under the cheekbone to give it a sharper shape, but instead of using a weird orange, choose a real shadow color like taupe (brown with a touch of gray). MAC Buff is a good one.

For someone who doesn't have a lot of cheek definition, tap a metallic cream like Dior Skinflash Primer on the high points to catch the light and "give the sensation of volume."

'Portrait of a Young Woman as Saint Apollonia,' Carlo Dolci

Fun fact: She's holding those pliers because, pre-sainthood, she had all her teeth pulled out. Her skin still looks stunning and alive, though, which really shows you the power of a good rouge and illuminator.

To mimic the light hitting her face, turn to your new best friend again: highlighter. "The 'wet' touch on the face gives the effect of fresh, natural skin. So I apply it down the bridge of the nose and the cheekbone," Violette says. "I also love to apply it on the Cupid's bow because it plumps the upper lip and makes them sexy without trying too hard." (Saints can be sexy too.)

When it comes to blush, you want it to look like there's blood flowing under the skin but more, like you have the best circulation in the history of hematology. For oily skins, apply powder blush to the cheeks, then dust transparent powder on top and blend so the blush looks like it comes from within. For drier complexions, choose a cream blush to catch the light (a sheer lipstick works too) and blend with your fingers for better control. Touch up around the nose, mouth, and under-eyes with concealer afterward—you don't want redness or shadows in those areas.

'Madonna in the Meadow,' Raphael

You know how artists paint on an underlayer first, then add more pigment here and leave some areas more bare there? That's what you're doing to your face.

This has, no doubt, been hammered into your brain since you were old enough to start caring about how you looked, but one more time, just because it's so important: Take care of your skin so you can resemble a 16th-century virgin using the smallest amount of makeup possible, even though 16th-century virgins probably had spots too—someone was simply nice enough not to include them.

When choosing a foundation, make sure to match the neck and face. After all, says Violette, "a painter wouldn't use a red beige [on one area] and a yellow beige [on the other]." (You've never seen an Eagle on a Rembrandt, right?) Then add shadows and highlights, then blush.

You might be tempted to swipe on some eyeliner next, but for a more period-appropriate look, dot it just between the lashes. And to everyone who was like, "No mascara, ewwwwwww?" All the cool Old Master chicks were doing it, so there.

7 Makeup Looks You Can Do with Your Eyes Closed

The No-Bullsh*t Way to Find Foundation That Matches

Chelsea Peng I'm Chelsea Peng, the assistant editor at MarieClaire.com.
This content is created and maintained by a third party, and imported onto this page to help users provide their email addresses. You may be able to find more information about this and similar content at piano.io
Advertisement - Continue Reading Below
More From Beauty
How I Mental Health: Maya Rudolph
Natural Sunscreens That Actually Work
Advertisement - Continue Reading Below
Why Byredo's Mixed Emotions Perfume Is Worth It
A Derm on Benzoyl Peroxide vs. Salicylic Acid
24 Hours With Huda Kattan
The Ultimate Guide To Curtain Bangs
Editor-Approved: The Best No-Streak Self-Tanners
Dazzling Makeup Looks From the Spring Runways
Jimanekia Eborn Is a Proud 'Trauma Queen'
What to Buy From Dermstore's Beauty Refresh Sale