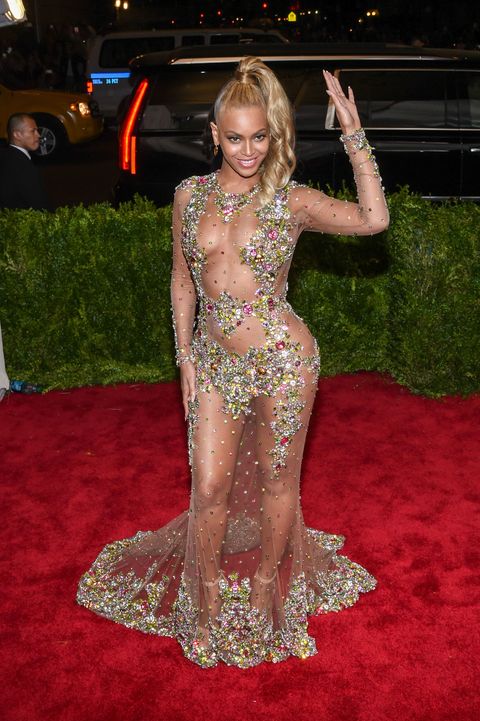 Beyoncé Giselle Knowles-Carter, goer to wherever the wind blows, changed her mind.

On her way down to the car that would whisk her away to the Met Gala, to party with other couture-clad famous people, the nonchalant thrower of wrenches into plans vetoed the "Asian-inspired" chignon she was originally supposed to wear, hairstylist Neal Farinahtold Us Weekly.

"She looks at me and says 'Neal, I want to change my hair, will you change my hair?' And I said, 'Honey, there could be cameras in the elevator.'" [Editor's note: Farinah mentally packed a go-bag and moved to Montana shortly after those words left his lips.] "She says, 'You have five minutes.' And I said, 'Girl, what do you want me to do with the hair?' And she wanted a high ponytail. With Beyoncé, she looks at herself and she says, 'This isn't right, let's change it.'"

Chelsea Peng I'm Chelsea Peng, the assistant editor at MarieClaire.com.
This content is created and maintained by a third party, and imported onto this page to help users provide their email addresses. You may be able to find more information about this and similar content at piano.io
Advertisement - Continue Reading Below
More From Best of the Red Carpet 2021
Alan S. Kim Channeled David Rose at the Oscars
The Best Red Carpet Looks at the 2021 Oscars
Advertisement - Continue Reading Below
The Best-Dressed Celebs at the 2021 SAG Awards
The Best Red Carpet Looks at the 2021 Grammys
The Chicest Golden Globes Looks From IRL and Home
50 Celebrities on Their Very First Red Carpet
The Best Looks of the Oscars After-Parties
Did You Spot Charlize Theron's Hidden Hair Detail?
Timmy Photobombed Margot on the Oscars Red Carpet
Leonardo DiCaprio's Oscars Date Is...Not His Mom