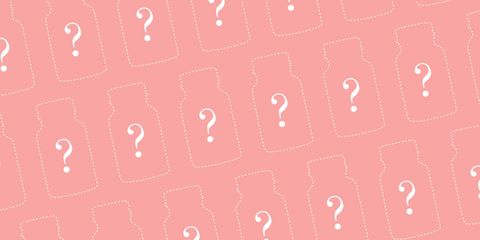 Beauty inspo can come from the unlikeliest of places—for instance, Nigella Lawson's Instagram, which 595,000 masochists follow to look at pictures of singed meringue swirls and hand-torn mozzarella, none of which can be readily eaten.

I've long been one of those hangry hangers-on (no one captures butter-sodden toast quite like Nigella), so it was rather out of the ordinary when she posted not a runny yolk nor a head of Romanesco, but a non-gooey, completely inedible beauty product.

A rare, so precious, beauty tip: #NIOD Neck Elasticity Catalyst, aka Anti-Scraggy Neck Cream that Actually Works from @victoriahealth It seemed only fair to share...

Pronounced "knee-odd," the brand's neck cream has the pro-elastin technology to back up its sci-fi-sounding name/counteract those deep horizontal lines we're all getting from slumping down against our headboards reading every night. Amongst its promises, ranked in order of least to most miraculous: hydration, improved texture, higher skin density (the slower to slack, my dear), and elasticity, all of which happens on both a surface and subcutaneous level.

Applied twice daily to the area between your upper lip and décolleté, the NEC takes about six weeks to produce noticeable results, but the extra moisture should reduce the appearance of lines pretty much immediately. One final reason Nigella and her Reynolds-ian complexion might have given the NEC the thumbs-up, aside from the wattle-preventing benefits? It smells a bit like bananas.

Chelsea Peng I'm Chelsea Peng, the assistant editor at MarieClaire.com.
Advertisement - Continue Reading Below
More From Beauty
13 Super Pretty Valentine's Day Makeup Tutorials
Hourglass' CEO Shares Her Morning Beauty Routine
Advertisement - Continue Reading Below
All the Details on Brow Lamination
These Makeup Trends Will Dominate the Year
Yes, You Need a Silk Pillowcase
WORTH IT: La Mer Renewal Body Oil Balm
Shampoos to Make Your Hair Grow Super Fast
These Are the 3 Lipsticks I'm Obsessed With RN
The New Fragrances You Need to Try This Year
Blake Lively Looks So Different With a Bowl Cut