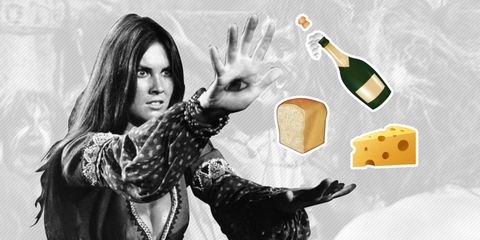 They might be amongst the most regretful-making substances known to man, but gluten, alcohol, and dairy might as well be the three essential food groups—or at least can be found in anything you might derive satisfaction from eating. But at what cost to your skin?

Although research still hasn't proven a direct cause-and-effect relationship between any of these and the zit that's apparently signed a 99-year lease on your chin, you might like to know which is the least of three evils before you go eliminating them all from your diet. (Because, as Trumpkin would say, "Sad.") So first, we'll evaluate their effects separately. Et puis, we'll see how two top skin experts ranked them in order of badness. It's going to be a *bumpy* ride. (So sorry.)

You know the drill: Dries you out, yet simultaneously makes you puffier than Will Smith before he could CapriSun a bottle of Benadryl.

In excess, it also increases blood flow and dilates blood vessels, causing redness. You will feel pretty, but you won't look it.

Despite the current anti-brioche atmosphere, not everybody's face will reflect that they had one focaccia square too many with dinner last night. However, if you are sensitive to gluten, the inflammatory reaction in the gut could lead to severe small intestine damage, a location where acne is thought to originate.

Another one that depends on your individual constitution, but the thinking is that Mont d'or and skyr and all those other lovely things are mucous-forming and hard for the body to digest, while the hormones involved in milk production mimic those that trigger blemishes. And since hormones are fat-soluble and there are more sebaceous glands in the face, that explains the constellation that takes residence on your jawline after you order a New God Flow at Morgenstern's.

Or You Could Chow Down on These Instead 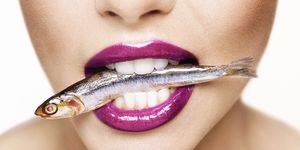 How to Eat Your Way to Better Skin

The experts: Renée Rouleau, top aesthetician and founder of the Renée Rouleau Skin Care collection, and Dr. Rachel Nazarian at Schweiger Dermatology Group. The rankings: completely different, though that's part of the fun, no?

"[Dairy] by far has the most visible consequences, which is cystic acne—those hard, painful bumps that develop deep within the skin and take forever to go away," Rouleau says. [Editor href='https://www.marieclaire.com/beauty/news/a13276/cystic-acne-cure-renee-rouleau-anti-cyst-treatment/' target='_blank">Thank goodness WE\'VE FOUND THE CURE.'] She then follows that with booze, then bread, for the dehydrating properties illustrated above and the relatively small population it affects, respectively.

Dr. Nazarian's lineup, on the other hand, goes booze, bread, dairy. "Alcohol is the greatest skin offender with three strikes," she says. Dullness and flushing make two, and rosacea adds a third, if you're predisposed. Gluten comes next, because "evidence has shown that high-glycemic foods may be the trigger for inflammatory conditions, like acne." And dairy brings up the rear, because she says there's not quite enough science to back the hormone-oil correlation.

What It All Means

It's quite simple, really, if you listen to your body and are honest with yourself about your priorities. Which of the three has historically given you the most trouble? And are you more concerned about your appearance tomorrow or won't you need to give a sh*t until weeks from now? Or, as Dr. Nazarian put it, "you could just have a slice of rum cake with a scoop of ice cream on top, and find yourself a good dermatologist." Because YOLO.

Chelsea Peng I'm Chelsea Peng, the assistant editor at MarieClaire.com.
This content is created and maintained by a third party, and imported onto this page to help users provide their email addresses. You may be able to find more information about this and similar content at piano.io
Advertisement - Continue Reading Below
More From Beauty
Why The Lashify Control Kit Is Worth It
What to Buy From Sephora's Spring Savings Event
Advertisement - Continue Reading Below
Hot Tools Are No Match for Heat Protectant Sprays
How to Tighten and Firm Your Neck Area
The Blue Shampoos Brunettes Will Love
Snuggling Gives Kristen Bell a Great Sense of Calm
The Ultimate Guide to the DIY Pedicure You Deserve
Jen Batchelor Schedules Self-Care on Her Calendar
Face Masks That Double as Acne Treatments
Behold, Your Skin Type Cheat Sheet
Created for From Marie Claire for Created by Marie Claire for
Neutrogena