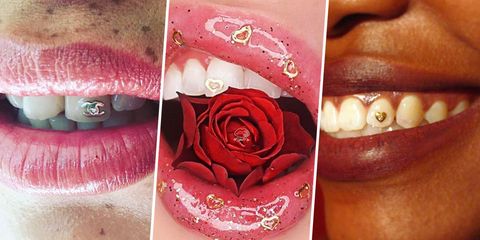 MAC's Spice lip liner and crimped strands were cool and all—but we think the most impressive beauty trend of the '90s was actually hidden from plain sight. If you wanted a "tooth gem" sighting, you'd have to get someone to *smile*.

The tongue-in-cheek accessory, which is making a comeback, consists of a small gold, silver, or crystal gem that is bonded to the tooth using a special adhesive that can keep it attached for years. Typically they're worn one at a time—like an accent nail for your teeth—but you can wear more than one, or pack 'em in, if you want. However, dentists will advise you not to try this at home as you can damage a tooth's natural enamel.

The accessory has been on the rise for a couple of years thanks to some major celebrity endorsements: Katy Perry rocked the Nike "check" logo on one of her pearly whites back in 2015, and as of January of 2017, Halsey is sporting a gold star emblazoned on one of her canines.

But it's not just pop stars getting in on the fun, thanks to pro-tooth-gem outposts—which tend to be a step up from the offerings you'll find at the dentist—many are using the tiny accents to express themselves. In fact, it was L.A. 's Tooth Kandy that gave badass model Adwoa Aboah a crystal-studded Chanel logo gem, which would eventually appear on the cover of i-D magazine.

What's more is that beauty bloggers are getting in on the action, too. Not just applying them to the teeth, but even pressing them into the lips and sealing with a gloss. And given that we're in the midst of a lip art renaissance of sorts, we're bound to see more tooth gems cropping up. So you may want to schedule a teeth cleaning and get ahead of the trend...

Lauren Valenti Associate Web Editor I’m the associate web editor at Marie Claire.
Advertisement - Continue Reading Below
More From Beauty
Facts to Know Before You Get a Keratin Treatment
The 3 Lipsticks I Have In Rotation Right Now
Advertisement - Continue Reading Below
Why Using a Product With Peptides Is Worth It
Created for From Marie Claire for Created by Marie Claire for
StriVectin Peptight
Line Edit: Eyeliner Trends That Are High Drama
Black-Owned Beauty Brands You Need to Know
The Body Lotion Your Dry Skin Has Been Craving
Know the Signs That Your Makeup Has Expired
Kendall Jenner Has Rapunzel Hair On 'Garage' Cover
WORTH IT: Royal Fern Skin Perfecting Essence
Blonde vs. Brunette: Celebs Who Made the Switch