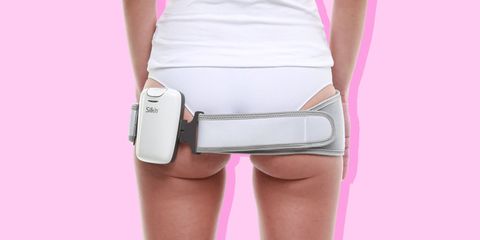 Imagine a world where instead of going to the gym or attempting to shape or tone your body in any way, you could just chill on the couch with a box of French fries, and have a tiny device melt all of your fat away for you? For me, this is one of my personal dreams for the future. And according to a new crowd-funded device, that future may already be here. 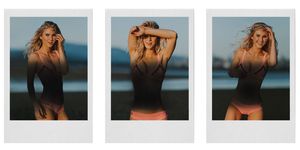 Meet the Silk'n Lipo, a hand-sized device that straps to your body to allegedly "reduce stubborn fat and strengthen underlying muscles" with "no diet [or] exercise" in just 15 minutes, and for the low, low price of $279. Wow! It's basically like magic! And if that sounds too good to be true to you, then hey, welcome to my side of the skeptic's table.

Because a lifetime's worth of knowledge about basic bodily functions, plus a childhood obsession with As Seen on TV infomercials, pretty much proves to me that you can't lose weight without completely changing your dietary habits and upping your workouts. But according to the IndieGogo page, which has already raised more than $320,000 by 865 very wealthy backers, my line of logical thinking is straight-up silly, especially when you watch the video.

The not-at-all empowering video, which features fun phrases like "mommy tummy" and "thunder thighs," includes a bunch of attractive (white) actors grabbing at their nonexistent fat while excitedly exclaiming "no diet!? No exercise?! Only 15 minutes a day?!" There's also some tomato cutting, a "Magic School Bus"-level fat illustration, and a dude in a Santa hat. Honestly, the video has it all.

But still, I remained unconvinced. So I called up my new plastic surgeon friend, Wright Jones, MD, founder of Muse Plastic Surgery, and asked his professional, medical opinion on each of the major claims the Silk'n Lipo makes about its product. And yes, he had some opinions.

REALITY: "First of all, the technology behind this device isn't actually clear," says Jones, noting that "low-level light therapy" is actually nonspecific. "Is it a type of laser therapy? Is it a type of radio frequency? Not that it would really make a difference, since neither would be powerful enough to destroy fat in an at-home device, but the technology isn't transparent, which is worrisome."

And then there's the EMS component: "Electrical muscle stimulation is commonly used in physical therapy for pain therapy, since it contracts specific sections of muscles," says Jones. "But it absolutely won't melt fat, and it won't tone your muscles like a workout would." In fact, the FDA clearly rejects the use of EMS for weight loss, tonight, or contouring. 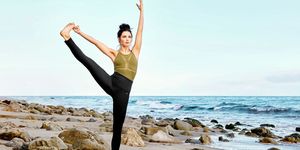 CLAIM: It's the same technology found in the machines used by professionals.

REALITY: "No, it's totally different," says Jones. "Not only are the machines used in doctors' offices FDA approved, which this device isn't, but they're also significantly more powerful, more effective, safer, and utilized by a trained professional."

Plus, notes Jones, the only effective fat-reducing machines that exist need to be so powerful, they cause the fat cells to literally collapse in on themselves and destroy themselves. "So to just apply some applicator on the surface of your skin, at home, and have it shrink or destroy fat cells sounds highly unlikely," he says.

CLAIM: It works in just 15 minutes a day.

REALITY: "That seems incredibly short, especially using anything with the name 'low-level' energy," says Jones. "Most of the machines we use in office use high-frequency radio ablation or laser therapy, which are not low-level at all, and even those require 30 minutes or longer per area to have an impact."

REALITY: Well, to be fair, Jones hasn't tested the device in person, and neither have I, mainly for the fact that I'm terrified it'll maim me. "I wouldn't be surprised if people accidentally get burned with this device from incorrect usage," says Jones, "or that they'll over-treat or under-treat an area so much, they'll get bodily irregularities."

Amen, Sex Once Per Week Slows Aging
A 20-Something\'s Guide to Thinning Hair
But, the main issue? "I think the majority of people will just spend a lot of money and not see any results," he says. "You need to understand the contradictions and the caveats to the human body before you can try to alter it with a machine, and I don't believe we have found the technology yet to effectively do that at home."

So, you know, if you want to shell out almost $300 for a possibly awesome, possibly ineffective device, I won't stop you. In fact, I will really, really, really encourage you, so you can report back to me with your thoughts, without me needing to try it for myself. In the meantime, I'll be waiting here with bated breath.

Chloe Metzger Deputy Beauty Director Chloe Metzger is the deputy beauty director at Cosmopolitan, obsessively writing about new makeup launches, the best hair products (curly girl here; whattup), and the skincare formulas that really work for every skin type (follow her on Instagram to see behind-the-scenes pics of that magazine life).
This content is created and maintained by a third party, and imported onto this page to help users provide their email addresses. You may be able to find more information about this and similar content at piano.io
Advertisement - Continue Reading Below
More From Beauty
There's a BB Cream for Every Single Skin Type
Consider This a Sign to Get a Lob This Summer
Advertisement - Continue Reading Below
Foot Peels Are Your Satisfying Secret to Soft Feet
Bronzers That Leave Your Skin Sun-Kissed & Glowing
The Dry Shampoos You Can Count On
Should You Be Using a "Natural" Toothpaste?
Black-Owned Beauty Brands You Need to Know
Charlotte Cho Swears By This $22 Liquid Liner
First Look: Olivia Palermo Beauty
Long Hairstyles for Every Shade and Texture