Remember when Kim Kardashian was photographed on a beach vacation sporting some cellulite? To be clear, cellulite is not big deal, completely normal, and nothing to be ashamed of. But having paparazzi photograph your nearly naked body when you're not prepared for it is a big deal, and in a clip from Sunday's Keeping Up with the Kardashians, Kim fully freaks out when she discovers the images online.

"Oh my god," she says as she scrolls through a phone in the clip above. "F*ck. I don't get it! I literally don't look like this!"

"It's just this scrutiny that we get all the time," Kim continued during an on-camera interview. "We try to avoid that, so I thought, 'Okay, I'm going on a private vacation, not posting, I'm doing all the steps to try to be as private and discreet as possible.' And then you take pictures and if they're not, like, 'perfect' people just like body shame you and criticize you." 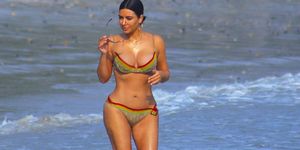 This isn't the first time Kim's talked about the images:

"I saw these awful photos of myself when I was on a trip in Mexico and people were Photoshopping them and sharpening them, and they're the worst photos," Kardashian said on The View. "I definitely was not in my best shape. I hadn't worked out in about twelve weeks, I'd had two surgeries on my uterus. We documented that on the show. But I was already not feeling like myself and then when people were like sharpening them and making them look way worse, and then those were going around, I was like, 'Okay, I'm going to get it together,' and I started working out with this bodybuilder girl."

Moral of the story: Kim looks great regardless of whether or not she has cellulite. Catch the scene above on Keeping Up with the Kardashians, Sunday night on E!.

Related Stories
Kim Kardashian Just Called Out Donald Trump
Kim Kardashian Teased Family Pregnancies on Insta
Mehera Bonner Contributor Mehera Bonner is a news writer who focuses on celebrities and royals—follow her on Instagram.
This content is created and maintained by a third party, and imported onto this page to help users provide their email addresses. You may be able to find more information about this and similar content at piano.io
Advertisement - Continue Reading Below
More From Celebrity
Chrissy Teigen Shared a Sweet Video With Luna
EmRata Displayed Her Bump in an Open Button-Down
Advertisement - Continue Reading Below
Harry Sent a Legal Warning Over "False" Article
Chrissy Teigen Talked About Her Baby Loss Photos
Chrissy Teigen Opens Up About Her Loss
A Look Back at Gwen Stefani & Blake Shelton's Love
Serena Williams Shows Off Toned Body In BTS Photos
See a Romantic New Photo from Beatrice's Wedding
Harry Was Treated as a "Spare" by the Royals
Cardi B Called Out Racist Reactions to Her Birkins