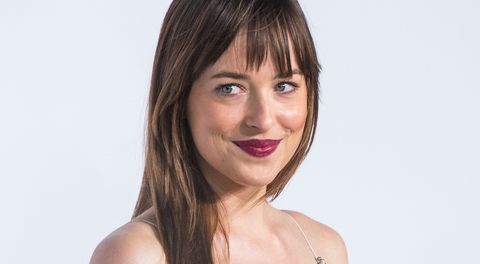 Update, 9/18: Pros and cons of starring in Fifty Shades Darker...Pro: You get to keep sex toys you'd never buy on your own; Con: No one wants to date you—at least that's what Dakota Johnson reveals in an interview with Ellen DeGeneres.


Also, fun (LOL) fact: Not a single person in Johnson's family has seen her movie, but one of her cab drivers did and thought the first film could've used more sex. Everyone's a critic...

Original, 2/20: Dakota Johnson has had quite the busy life lately with Fifty Shades of Grey, attending endless premieres and talk shows to promote the film. And given the its massive success and already confirmed sequels, it's no surprise the sheer force of it has killed Johnson's love life for the time being.

Us Weekly reports Johnson and her boyfriend, Matthew Hitt, a Welsh model/musician, broke up during the holidays because of the whole ordeal. "Her life was getting too crazy and it wasn't something that he wanted to be a part of," a source told the outlet. His loss.

But "it wasn't a bad break," the source noted. Oh well, looks like Johnson has the perfect real-life inspiration for her other new role in How to Be Single...

Alyssa Bailey News and Strategy Editor Alyssa Bailey is the news and strategy editor at ELLE.com, where she oversees coverage of celebrities and royals (particularly Meghan Markle and Kate Middleton).
This content is created and maintained by a third party, and imported onto this page to help users provide their email addresses. You may be able to find more information about this and similar content at piano.io
Advertisement - Continue Reading Below
More From Celebrity
Gigi Shared the Sweetest Photo of Zayn and Khai
Meghan Shared the Cutest Update About Archie
Advertisement - Continue Reading Below
Meghan's Heartfelt Father's Day Gift for Harry
Sophie Turner Shared a Sweet Unseen Pregnancy Snap
The Queen Has a Collection of Dog Toys for Sale
Meghan Revealed the Nod to Diana in 'The Bench'
Celebs Are Posting Tons of Father's Day Tributes
Will Spent Father's Day with George and Charlotte
Charles Won't Allow Archie to Become a Prince
Royals Had Several Talks About Archie's Skin Color