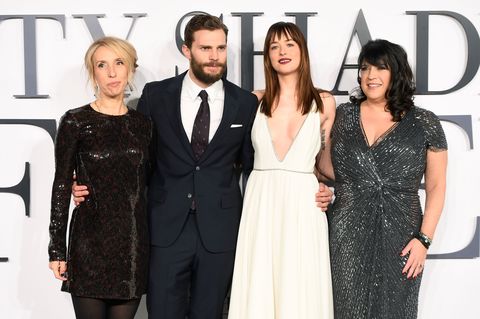 Proving once again that rumors are like the fluffy white popcorn surrounding un-chewable, tooth-cracking kernels of truth, Fifty Shades of Grey director Sam Taylor-Johnson has announced that she is not returning for the sequels. Oh, and neither is screenwriter Kelly Marcel.

"While I will not be returning to direct the sequels, I wish nothing but success to whoever takes on the exciting challenges of films two and three," Taylor-Johnson said in a statement. "Directing Fifty Shades of Grey has been an intense and incredible journey for which I am hugely grateful. I have Universal to thank for that. I forged close and lasting relationships with the cast, producers and crew and most especially, with Dakota and Jamie."

Sad but not even close to discovery-of-the-Red-Room shocking, given that apparently, E L James wants to adapt Fifty Shades Darker for the screen herself and that, you've probably heard, she was reportedly kind of a pain to deal with.

But you know what else no more FSOG means: extended sanity-regaining vacation!