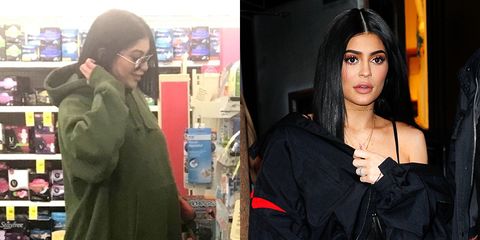 Rumors that Kylie Jenner is pregnant with her first child first started circulating in September, but the star still hasn't confirmed (or denied) that she's expecting. In fact, she's basically been in hiding since the news broke—meaning people are desperate for pictures of Kylie and her alleged baby bump.

So, when pictures of a possibly-pregnant woman who looked a lot like Kylie shopping at CVS in a baggy green hoodie surfaced this week, the internet went nuts.

While the woman in the photo does bare a resemblance to Kylie, TMZ is now reporting that sources close to the star have confirmed it's not actually her. The unnamed sources also told TMZ that Kylie rarely leaves the house (that much is obvious to anyone who has been following news of her alleged pregnancy) and that she's due in March.

As we get closer and closer to that supposed due date, interest in Kylie's pregnancy only grows. People have taken to photoshopping pictures to imagine what pregnant Kylie looks like. What's more, during this week's Keeping Up With the Kardashians two-part special, her mom, Kris Jenner, revealed that a member of Kylie's staff was caught trying to take pictures of her, presumably to sell.

"There's always somebody that's trying to exploit the certain situation, and to have somebody in her own home trying to snap pictures they shouldn't be snapping is really, really stressful," Kris said during the episode. "You want to be able to trust the people that you're surrounded by, but we have to really be on alert at all times, and that's extremely upsetting when you feel like you can't be in your own bedroom or bathroom."

Kayleigh Roberts Contributor Kayleigh Roberts is the weekend editor at Marie Claire, covering celebrity and entertainment news, from actual royals like Kate Middleton and Meghan Markle to Hollywood royalty, like Katie Holmes and Chrissy Teigen.
This content is created and maintained by a third party, and imported onto this page to help users provide their email addresses. You may be able to find more information about this and similar content at piano.io
Advertisement - Continue Reading Below
More From Celebrity
Joe Jonas Took a Stroll With Daughter Willa
Lizzo Stuns With Bright Red Hair and Bangs
Advertisement - Continue Reading Below
William and Kate Are Hiring a Live-In Staff Member
Gigi Hadid Says She Voted With Her BB
Will Asked His Uncle to Talk to Harry About Meghan
Why the Queen Denied Meghan's Wedding Tiara Pick
Will & Harry's Reactions to Their Parents' Divorce
LOL, Kelly Ripa Comments on Her Hubby's Bulge 🍆
Adele Talked About Her Weight Loss on 'SNL'
J.Lo Steps Out in the Perfect Autumnal Look