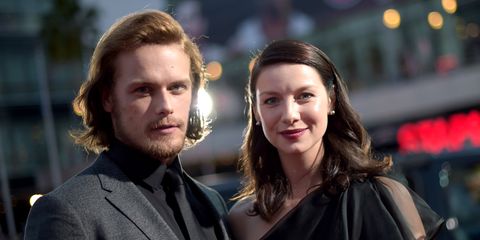 Outlander's Caitriona Balfe and Sam Heughan play two madly-in-love Scottish time travelers on TV (okay, only she travels and only he's Scottish)—and the world desperately wants art to mimic real life. In other words, fans want Sam and Cait to do it like they do on the Discovery channel, or in this case Starz. Yes, both actors are in relationships (Caitriona is actually engaged), but that doesn't stop them from giving we, the people, what we want on Twitter. Here are some of their best flirty exchanges.

The time Caitriona captioned a picture with a self-deprecating comment and Sam chimed in to remind her how beautiful she is:

@caitrionambalfe still a beauty though. 👌

The time Sam celebrated 200,000 followers with an AMA and Caitriona asked the only important question:

@SamHeughan what is your favourite thing about your TV wife ????

@caitrionambalfe learnt my lesson....
Unless you want some more smut for your birthday?
Happy to oblige!
😘👄

The time they teased each other about catching zzzz's on set:

The time Sam posted this picture to Twitter and we spent the next week imagining playing doubles with them:

The time Caitriona got a whole fan convention to help her record a message for Sam:

The time Sam invited Twitter to ask him anything and Caitriona kept pointing out all the questions about how beautiful and awesome she is:

The time Caitriona lovingly teased Sam about his drinking abilities:

The time Sam wished Caitriona luck at the Golden Globes and she responded with a bunch of kissy face emojis:

The time Caitriona credited her "Tele Hubby" with helping her get noticed by the Golden Globes:

Thank you darling. I won the golden ticket with you as my Tele Hubby 😘😘😘

The time Sam made a NSFW Valentine's Day joke and Caitriona totally called him on it:

As you were, that is, if you can even recover from this level of flirtatiousness.

Related Story
Inside the Making of 'Outlander's' Sex Scenes
Kayleigh Roberts Contributor Kayleigh Roberts is the weekend editor at Marie Claire, covering celebrity and entertainment news, from actual royals like Kate Middleton and Meghan Markle to Hollywood royalty, like Katie Holmes and Chrissy Teigen.
Advertisement - Continue Reading Below
More From Celebrity
36 Celebrity Couples Who Love Some PDA
Ben Affleck Is Blond Now
Advertisement - Continue Reading Below
A Timeline of Charles and Diana's Relationship
Kendall Jenner Wants to Work for Beyoncé
Harry & Jon Bon Jovi Sing Together at Royal Event
Khloé Kardashian Is Being Trolled Over Febreze
A 'Friends' Reunion Special Is Coming to HBO Max
Katie Holmes Is in Head-to-Toe Chloé at Their Show
Ariel Winter Now Has Strawberry Blonde Hair
46 Stars Who Dated Before They Were Famous