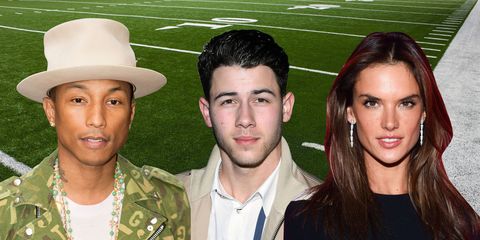 Super Bowl 50 is (almost) here. And while the Carolina Panthers take on the Denver Broncos at the Levi's Stadium on Sunday, more and more people are flocking to San Francisco to watch the game, join in on the day drinking, and party late into the night—yes, even celebrities. So where will your favorite stars be celebrating? Here, a star tracker of sorts. (Though you already know where Coldplay and Lady Gaga will be.) (Hint: They'll be singing.) Psst—more importantly, come hang out with me. We'll be showing some of the action on the Marie Claire Snapchat! 👻

Lounges gear up and get ready for fans and celebs alike in San Francisco—and if you're lucky enough to be in town, you might just see them. Verizon, Pepsi, New Era, and more are all setting up shop to interact with fans—and celebs like Victoria Justice, Jordin Sparks, Alyssa Milano, and others who probably won't be announcing their presence (until the paps catch 'em) will be there stopping by.

While some *private* festivities technically kick off on Wednesday and Thursday, Friday is the big push for parties to start the weekend right.

Pepsi will be hosting a preview of Kola house, a new experimental lounge that will launch in NYC in the spring, and guests will listen to some tunes by Swizz Beatz. Later that night, they'll be partnering with DirecTV for a Pharrell concert at Pier 70.

ESPN will be hosting their 12th annual shindig, with a performance by Nick Jonas and music by D-Nice. Ketel One Vodka will be slinging the cocktails and Bud Light the beer, while Express will be handing out limited-edition ESPN The Party t-shirts for party-goers.

The Bleacher Ball also takes place on Friday, with a performance by the Zac Brown Band, with food by celebrity chef Daina Falk.

Leather & Laces will be kicking off it's two-night party on Friday, with appearances by Jeremy Piven and Emmanuelle Chriqui. As for Saturday...

Saturday is jam packed with celeb appearances and parties. The second night of the Leather & Laces party features Emily Ratajkowski and Alessandra Ambrosio as hosts to kick off the celebration.

New Era will also be hosting their New Era Gold Rush Party at The Battery, with sets by DJ Myles Hendrick, DJ Mia Moretti, and Diplo, plus a performance by Future.

Taste of the NFL, AKA the Party with a Purpose, will also kick off on Saturday. The annual event held on the eve of the Super Bowl pairs NFL stars from all 32 teams (current and former) with top chefs from around the country, all for a great cause—to feed Americans in need. All of the proceeds generated from the season long Kick Hunger Challenge and party goes back to local communities. This year's party will be hosted by celebrity chef Andrew Zimmern and will include a performance by Third Eye Blind. Alyssa Milano, Nick Lachey, Kristi Yamaguchi, and more will all be lending support.

If you see any celebrities today, they'll surely be on the stands, in the suites, and on the stage. Coldplay is set to perform the halftime show, while Lady Gaga will be showing off her pipes by singing the National Anthem.

Samantha Leal Senior Web Editor I'm Sam, the senior editor at MarieClaire.com.
This content is created and maintained by a third party, and imported onto this page to help users provide their email addresses. You may be able to find more information about this and similar content at piano.io
Advertisement - Continue Reading Below
More From Celebrity
Simone Biles Is Honored With Her Own GOAT Emoji
Kate Winslet Reveals Her Favorite Red Carpet Look
Advertisement - Continue Reading Below
Margot Robbie Had a Life-Size Cutout of John Cena
Jennifer Lopez and Ben Affleck Are IG Official
Celebs Share Their Emotional Infertility Stories
14 Candid, Unseen Photos of the Royal Family
Rare Photos From Diana and Charles' Wedding
Ariana's Former Home Has an IMAX in the Building
Cardi B Stunned in a Cherry Red Mugler Dress
Kate Beckinsale Reveals She's Never Been on a Date