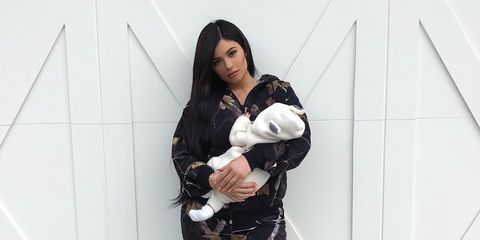 Another day, another Kardashian-Jenner controversy. Following the first full photo of Stormi Webster being posted on Instagram, Kylie Jenner has been receiving backlash over something completely unexpected—the length of her fingernails.

In the mother-daughter photo, Jenner has visibly long, manicured nails, and *some people* on the internet have decided that this is unacceptable for a new mom. Basically, because her fingernails are soooo long, a number of critics have decided that Jenner can't possibly change diapers. Rolls eyes.

While most of the world will probably agree that it's totally fine for a new mom to get a manicure if she wants to, a select few are claiming that this is not the case:

How the eff does @KylieJenner wear such long nails with a new born? I can't even go long without scratching my own face!

How does Kylie wipe Stormi’s ass with those longass nails, I’m shook

On another note.. How the hell does Kylie Jenner have the time to do her makeup & hair?! When I had a 1 month old I so did not even once put makeup on or comb my hair 😩😐

Not everyone is as unsupportive though, with a lot of fans coming to Jenner's defence:

All these people up in arms about Kylie's nails drive me nuts. Why you mom shaming???

Bitch, people dissing Kylie for having long nails is dumb asf. YES it’s possible to change a baby’s diaper with long nails, if you smart, you’ll know how to work your way around your child w/o hurting them duhhhh 🙄 y’all overreact too much 🤦🏻‍♀️

Are ppl really mom shaming Kylie for having long nails? I have always had long nails and taken care of my kids just fine. PEOPLE ARE WEIRD.

I can’t believe Kylie Jenner is being slammed for having long nails as a mom to a newborn. That doesn’t mean she’s less of a mom for getting a manicure!

Kylie Jenner got hate Bc her nails are “too long to be caring for a newborn” WHAT ? I know plenty of mamas that have long nails and parent just fine

Whichever side you fall on when it comes to Jenner's manicure, it's clear that the new mom is completely besotted with baby Stormi. A source revealed to People, "She’s an incredibly doting and hands-on as a mom. She’s always been very maternal."

Allegedly, Jenner had originally planned to care for baby Stormi without any outside help, but has since had to reassess. According to People, "With the support and abilities she has to hire nannies and assistants, she’s been a really, really great mom."

Kris has been spending a lot of time at Kylie’s house since she came home with Stormi... Kylie has been a natural at being a mother. However, it has been overwhelming, and Kylie has relied on Kris during these first days."