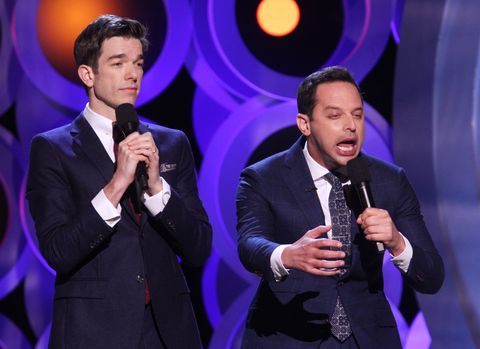 Last night, stars gathered in a cold, wet tent in Santa Monica (true story—Los Angeles is never prepared for rain) for the Film Independent Spirit Awards. Returning hosts John Mulaney and Nick Kroll addressed the terrible weather in their opening monologue, before launching into a cutting series of jokes about the men at the center of the #MeToo movement.

On the #MeToo movement as a whole:

"The rules have changed for men. Some men are like, 'What? I can't hug a woman anymore?' Not the way you’re doing it, pal—all low and breathy like, 'Hey it's 1998 somewhere, baby.'" Kroll added.

Mulaney then launched into an anecdote about a time he met Harvey Weinstein, the producer whose sexual misconduct scandal kicked off the #MeToo movement. "This is a true story. I met Harvey Weinstein once, this was in 2015 for a meeting and he was complaining to me in the meeting that Weinstein TV took up too much of his time. And he said, and I quote, 'Yeah, no one's gonna remember my movies. Forget Pulp Fiction, my tombstone is gonna say Project Runway.' Aww, you don't gotta worry anymore, Harvey. It's not gonna say Project Runway. It's gonna say XXL Unmarked Grave."

The joke was met with shocked silence followed by uproarious laughter.

Kroll went on to share a story of his own, about Brett Ratner, who was also accused of sexual misconduct last year.

"Those who have had the pleasure of meeting Ratner know he is constantly scratching his balls,” Kroll said. “One day, he was really going to town on his sad sacks, below his Banana Republic boxer briefs. We watched him walk away and walk over to the crafts services table where he touched six different doughnuts and then he grabbed one and walked away. If that’s how the guy treats doughnuts…"

On Kevin Spacey and Woody Allen:

The hosts also worked in digs at Kevin Spacey and Woody Allen, with Kroll musing, "Can we still love K-PAX?" Mulaney then chimed in, "And what about Woody Allen and his last 20 not-watchable movies? Can I still not watch them or must I reevaluate based on these new allegations that were a matter of public record 30 years ago?"

Finally, the duo turned their attention to the apologies the men at the center of these scandals have made and how they're, well, mostly terrible. The entire monologue is worth watching for yourself, which you can below:

This content is imported from YouTube. You may be able to find the same content in another format, or you may be able to find more information, at their web site.
Kayleigh Roberts Contributor Kayleigh Roberts is the weekend editor at Marie Claire, covering celebrity and entertainment news, from actual royals like Kate Middleton and Meghan Markle to Hollywood royalty, like Katie Holmes and Chrissy Teigen.
This content is created and maintained by a third party, and imported onto this page to help users provide their email addresses. You may be able to find more information about this and similar content at piano.io
Advertisement - Continue Reading Below
More From Celebrity
Princess Beatrice Has Given Birth to a Baby Girl
Gigi Hadid's Mom Shared Sweet Pics of Khai
Advertisement - Continue Reading Below
Kate & Will Probably Won't Have a Fourth Child
Ben & Jen Plan to Spend the Holidays Together
Kate & Will Are "Anxious" About Harry & Meghan
Mandy Moore Calls Breast Pump Emmy's MVP Accessory
Royal Nanny to Get Damages from Interview Scandal
Prince William and Kate Will Focus on Work in 2022
Kate Middleton Shares Prince Louis's First Words
Prince Charles Shares Final Exchange With Philip