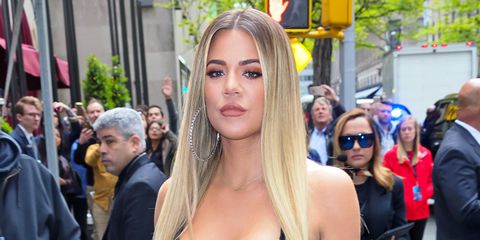 Last night, Khloé Kardashian stole the spotlight from the Oscars when she revealed the gender of her baby on Keeping Up With the Kardashians. And—in the event that you've been in a brief, 24-hour coma—she's having a girl.

Khloé took to Twitter to answer fan questions about her baby (like what she plans to name her), and also gave a full-blown update in a post titled "My Hopes for My Daughter."

"I can't believe I'm having a girl! It was such a special moment and I'm so happy I got to share it with you guys," she wrote. "My team put together this fun fill-in-the-blank game for me about what I hope for my little one when she grows up."

Said fill-in-the-blank game reveals a lot about how Khloé plans to parent—including the fact that her daughter won't be allowed to watch Keeping Up With the Kardashians until she's 13:

I think it would be cool for our baby to: speak many languages

The sister that will end up babysitting the most is: Kourt or Kim. They already have so many kids. What’s one more. LOL!

It would be cool if my baby’s secret talent was: singing.

My baby is going to grow up listening to: Old school music. We listen to it now. All Anita Baker, Michael McDonald, Marvin Gaye, Patti LaBelle, Michael Jackson…real music!

If my baby could excel at just one thing I hope it would be: self-love.

My child will be – 13 – when they watch their first episode of KUWTK.

My child will be – 15 (I’m not sure what TT will say) – years old when they’re allowed to go on their first date.

So many questions, including but not limited to: Will Khloé's child star on KUWTK without being allowed to watch the show? And does this mean the other Kardashian kids also don't watch themselves on TV?

Related Story
Kendall Jenner's Oscars Dress Is Risky Business
Kayleigh Roberts Contributor Kayleigh Roberts is the weekend editor at Marie Claire, covering celebrity and entertainment news, from actual royals like Kate Middleton and Meghan Markle to Hollywood royalty, like Katie Holmes and Chrissy Teigen.
This content is created and maintained by a third party, and imported onto this page to help users provide their email addresses. You may be able to find more information about this and similar content at piano.io
Advertisement - Continue Reading Below
More From Celebrity
George Won't Be Forced to Go to Boarding School
Diana Would Have Written a Memoir Too, Friend Says
Advertisement - Continue Reading Below
A Slice of Diana's Actual Wedding Cake Is For Sale
Matt Damon Trolled Ben Affleck and Jennifer Lopez
This Old Video of the Queen Saying "Nah" Is LOL
Diana Had a Secret Message on Her Wedding Shoes
Will's Friends Made "Jibes" About Kate's Mom
William Will Suffer "Worst" from Harry's Memoir
Simone's Boyfriend Sent Her the Sweetest Message
Harry's Friends Don't Want to Be in His Memoir