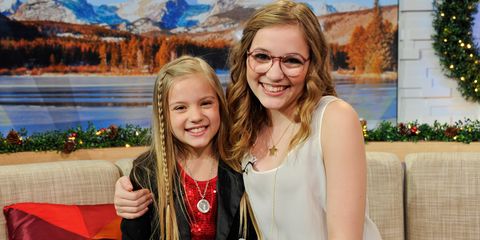 Remember when Lennon and Maisy Stella stole your hearts on the TV show Nashville, as Maddie and Daphne Conrad? Like that time they sang a cover of The Lumineers' song, "Ho Hey," together in Season One...

...Or, IRL, when they wrote their own children's book, In the Waves, and an original song to go with it? Flash forward to 2018 and the real-life sisters both look so grown up, they are almost unrecognizable.

Maisy, who was 8 years old in early episodes and is 14 now, looks almost like a replica of her sister, Lennon, at that age (see above for comparison).

Besides watching the Stella sisters transform into beautiful, young ladies, we've seen their musical careers launch from YouTube and go beyond the show. In January, Lennon announced she'd signed a recording contract to create her debut album, and in February, Maisy made her first solo debut on the Grand Ole Opry stage.

Related Story
What 30 Celebrities Looked Like in Their 20s
Alex Warner
Advertisement - Continue Reading Below
More From Celebrity
A Look at Royal Family Portraits Through the Years
Are The Weeknd's 'After Hours' Lyrics About Bella?
Advertisement - Continue Reading Below
Kendall and Harry Had a Moment At the Brit Awards
Dwyane Wade on Getting Zaya's Pronouns Right
Harry Styles' Diana-Inspired Brit Awards Outfits
Jenna Dewan and Steve Kazee Are Engaged
Kim Seemingly Tried to Kiss Kanye on a Kiss Cam
Ashley Graham Continues to Spread Body Positivity
'Bachelor' Victoria F. & Peter's Ex Had a Fight
Watch Meghan Attend the Ballet with a Puppet