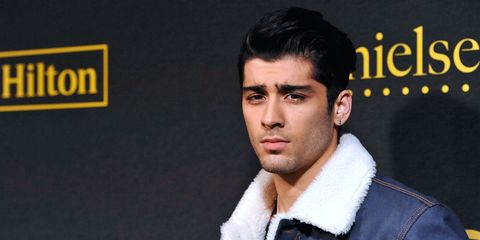 Zayn Malik has added two new pieces of art to the canvas that is his body.

While fans might have expected Zayn's first ink post-breakup to cover up the tattoo of Gigi's eyes on his chest, both of his new pieces of ink are on his neck (possibly because he's kind of running out of room for tattoos at this point).

Zayn showed off the completed version of the first piece, a large black rose on the back of his neck.

The second tattoo has yet to be revealed, but Zayn did share a photo of the artist working on the piece in a post captioned, "Neck yat."

Just because Zayn didn't cover his Gigi tattoo this time doesn't mean he plans to keep it forever. After his split from Perrie Edwards, Zayn covered the tattoo he got of her face he had on his arm.

It's possible Zayn will keep Gigi's eyes on his chest though. The two did end on good terms, if their Twitter statements are any indication.

"Gigi and I had an incredibly meaningful, loving and fun relationship and I have a huge amount of respect and adoration for Gigi as a woman and friend," he wrote. "She has such an incredible soul. I’m grateful to all of our fans for respecting this difficult decision and our privacy at this time; we wish this news could have come from us first. We love you all. xZ"

Gigi's statement was similar. "Breakup statements often seem impersonal because there is really no way to put into words what two people experience over a few years … not only in the relationship, but in life in general. I’m forever grateful for the love, time, and life lessons that Z and I shared. I want nothing but the best for him and will continue to support him as a friend that I have immense respect and love for. As for the future, whatever’s meant to be will be. xG," she added.

Kayleigh Roberts Contributor Kayleigh Roberts is the weekend editor at Marie Claire, covering celebrity and entertainment news, from actual royals like Kate Middleton and Meghan Markle to Hollywood royalty, like Katie Holmes and Chrissy Teigen.
This content is created and maintained by a third party, and imported onto this page to help users provide their email addresses. You may be able to find more information about this and similar content at piano.io
Advertisement - Continue Reading Below
More From Celebrity
Chrissy Teigen Shared a Sweet Video With Luna
EmRata Displayed Her Bump in an Open Button-Down
Advertisement - Continue Reading Below
Harry Sent a Legal Warning Over "False" Article
Chrissy Teigen Talked About Her Baby Loss Photos
Chrissy Teigen Opens Up About Her Loss
A Look Back at Gwen Stefani & Blake Shelton's Love
Serena Williams Shows Off Toned Body In BTS Photos
See a Romantic New Photo from Beatrice's Wedding
Harry Was Treated as a "Spare" by the Royals
Cardi B Called Out Racist Reactions to Her Birkins