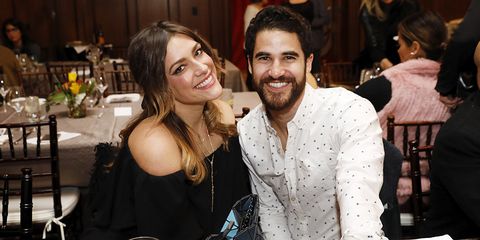 In January, The Assassination of Gianni Versace: American Crime Story and Glee star Darren Criss popped the question to longtime girlfriend Mia Swier. Here's what you to need know about the actor's fiancée.

They have been together for years.

In his engagement announcement, Criss revealed that he and Swier have been together for seven-and-a-half years.

"Mia and I have had seven-and-a-half years of fun, wacky, wonderful, CRAZY adventures together. And I’m happy to announce that we’re kicking those adventures up a notch. We’re goin for it. To boldly go where neither of us have gone before. Engage," he wrote.

She's a writer and producer.

According to her IMDb profile, Swier is a writer and producer at Fox Networks. At Fox, she has produced and directed promotional content for series including Glee (on which Criss appeared), Scream Queens, Gracepoint, The Mindy Project, New Girl, Raising Hope, and The Following.

Before coming to Fox, she worked as a producer on promotional content for Showtime on shows like Dexter, Homeland, Californication, Weeds, House of Lies, and Shameless.

Swier graduated from New York University in 2007 with a bachelor's degree in Mass Communication and Media Studies. Swier also attended New York Film Academy and worked as an intern on Saturday Night Live.

She has her own production company.

In 2009, Swier cofounded film production company Effin Media alongside Dan Bricker. The company produced A (Not So) Civil Union, a mockumentary short that Swier and Bricker wrote and directed themselves.

Criss wasn't a TV star when they started dating.

Even though they both work in the industry, Criss said in 2013 that he didn't know he'd be a TV star when they got together.

"Oh yeah, we’ve been together a long time," he explained. "I didn’t know I was going to be on TV when we started dating."

Getty Images
Related Stories
Darren Criss Won Fiancé of the Year at the Emmys
The Best Celebrity Instagrams from The 2018 Emmys
The Best (and Weirdest) Moments from Emmys 2018
Kayleigh Roberts Contributor Kayleigh Roberts is the weekend editor at Marie Claire, covering celebrity and entertainment news, from actual royals like Kate Middleton and Meghan Markle to Hollywood royalty, like Katie Holmes and Chrissy Teigen.
This content is created and maintained by a third party, and imported onto this page to help users provide their email addresses. You may be able to find more information about this and similar content at piano.io
Advertisement - Continue Reading Below
More From Celebrity
Chrissy Teigen's Therapist Inspired Her New Hobby
J.Lo Claps Back After Botox Comments
Advertisement - Continue Reading Below
Katie Just Posed in a Shirt Her Boyfriend Designed
Meghan Wasn't Appreciated for Royal Contributions
Harry & Meghan Have Had a Painful Year Since Exit
The Queen's Hot Grandnephew Is a Thirst Trap
Watch Diana Play Impromptu Piano in Rare Clip
Peek Inside the Cambridges' Country Home
Harry Is Heartbroken About His Family Situation
William and Harry Could Fight Over Diana's Legacy