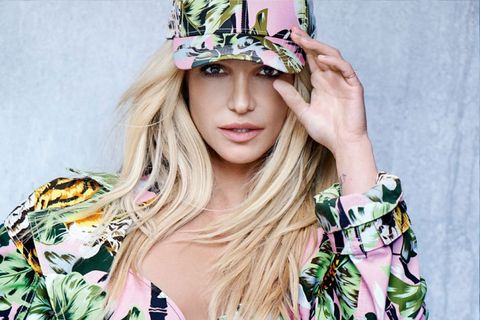 Britney Spears is the face of Kenzo's new nostalgia-based La Collection Memento, and really, could the beeee a more perfect fit (Chandler Bing voice intended—this is a nostalgia collection, after all)?

Brit shared the news on Instagram, along with a picture from the campaign, which was shot in Los Angeles by Peter Lindbergh.

So excited to announce my new campaign for @KENZO’s La Collection Memento No2 shot by @therealpeterlindbergh!!! #kenzolovesbritney

"This collection is very youthful," Britney told Vogue. "We had fun on set, even though it was a bit weird for me at first. I am used to shooting in a studio or a small space and this was out on the street. We were out there and I had really promiscuous clothes on, which felt odd but, of course, on film it turned out to be really cool."

Don't expect the campaign to bring back Britney's old look IRL, though. The singer has retired all her red vinyl jumpsuits for good now that she's a mom.

"It’s tricky because as a mother, you don’t take as much risk with your style," she said of how her style has changed since welcoming sons Sean and Jayden. "I think when I was younger I took so many risks and really went for it. There was no planning what I wore and it was like, okay, I am just going to put on the most outrageous thing. I think as a mother you hold back from that out of fear of embarrassing your kids and out of respect for them."

Kenzo has also been teasing the collection (and Britney's part in the campaign) on Instagram: