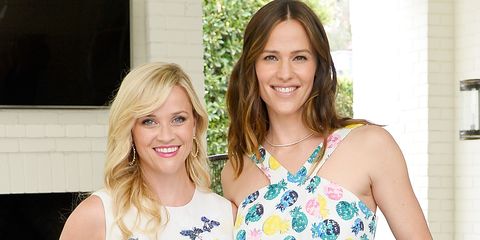 Since her split from Ben Affleck, Jennifer Garner seems to be having more fun than she's ever had. From that viral Oscars meme that saw the actress realizing something, to her jaw-dropping red carpet looks, Garner is living her best life right now. And she's not afraid to reveal her nerdy, quirky side, too.

In the most hilarious birthday post to gal pal Reese Witherspoon, who turned 42 this week, Garner writes, "Hey, @reesewitherspoon! I don't know why you're on my mind today.....🎷🎁🎈🎈❤️❤️❤️ #happybirthdayfriend." And you literally won't believe the video she posted for Witherspoon:

That's right. Jennifer Garner plays the saxophone, and she's not afraid to crack out her old band uniform to play Happy Birthday for her besties.

She even had a bespoke dress created just for the celebration by her design team at Draper James, and captioned the photo, "Cake for breakfast, anyone? Thank you for all the sweet birthday wishes! Feeling so much love today! I’m one lucky gal":

Cake for breakfast, anyone? Thank you for all the sweet birthday wishes! Feeling so much love today! I’m one lucky gal 💖🎂🎈(@draperjames even made me this birthday dress! 😍) Thank you thank you!

And she took the opportunity to make a birthday wish with her son, Tennessee:

As for Garner, it was recently reported in Us Weekly, according to a "pal" close to Ben Affleck, that she "put her heart and soul into fixing the relationship and wanted so desperately to turn things around for the children’s sake as well as theirs. She forgave him for so much, and still he couldn’t change."

Basically, Garner is now moving on with her life, and she's using social media to showcase her hilarious side.

Related Story
Jennifer Responds to Her Oscars Meme
Amy Mackelden Weekend Editor Amy Mackelden is the Weekend Editor at HarpersBAZAAR.com, where she writes about entertainment, celebrity news, beauty, and fashion.
Advertisement - Continue Reading Below
More From Celebrity
Khloé Kardashian Is Being Trolled Over Febreze
A 'Friends' Reunion Special Is Coming to HBO Max
Advertisement - Continue Reading Below
Katie Holmes Is in Head-to-Toe Chloé at Their Show
Ariel Winter Now Has Strawberry Blonde Hair
46 Stars Who Dated Before They Were Famous
Every Easter Egg in Taylor Swift's 'The Man' Video
Kate Middleton Does Some Sports in $38 Sneakers
Sarah Hyland Defends Ariel Winter’s Dress on Insta
Prince Harry Wants to Go by Just "Harry" Now
Ashley Graham Talked Breast Pumping in an Uber