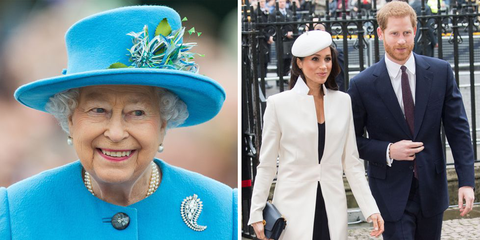 With Prince Harry and Meghan Markle's wedding fast approaching, it's only natural to wonder how Queen Elizabeth II feels about her grandson's forthcoming nuptials.

And while the monarch is likely excited to see the prince finally married off, there's one part of the day that she might skip altogether.

According to Entertainment Tonight, who spoke to royal expert Katie Nicholl, if the Spice Girls are performing at the royal wedding, then the Queen is unlikely to be dancing to any of their classic songs.

As Nicholl tells ET, "she's going to want to be a very important part of that day and indeed she will. But I think when it comes to the evening reception and certainly the party, if the Spice Girls are performing then I don't think the Queen's going to be on the dance floor."

Still, even if Queen Elizabeth II doesn't shake it to the left at Prince Harry's wedding to Markle, Nicholl says that we shouldn't "forget [the Queen is] hugely close to her grandson. They have a very special relationship. She is thrilled to be seeing Harry settle down and finally marry."

Last month, Mel B seemed to confirm that the Spice Girls would be reuniting at the royal wedding, when she appeared on talk show The Real. When asked if she knew anyone attending the big day, Mel B replied, "Yeah, I’m going... I don't know if I should've said that!" And when asked to elaborate, Scary Spice revealed, "Well, us five Spice Girls... why am I so honest?"

Regardless of whether or not the Queen ventures onto the dance floor, it's clear that she's extremely supportive of the union. As Nicholl told ET, the Queen has allegedly "said to the couple, 'This is your wedding, this is your day. Plan it as you want it.' [This] is very generous because, don't forget, the Queen is opening up her home."