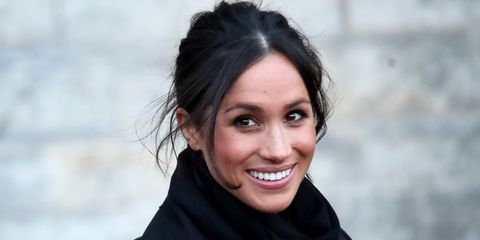 According to a new report, Meghan Markle has a lot to look forward to ahead of her wedding to Prince Harry. Apparently, Markle will be given an extra special present before she becomes a member of the British royal family.

A source has revealed to The Express that Markle will be gifted with her own Royal Coat of Arms before she marries Prince Harry on May 19. Kate Middleton received her own before she married Prince William, and Sophie, Countess of Wessex, was also given one before her marriage to Prince Edward.

According to The Express, "If Meghan receives a coat of arms it will also be personal and 'designed to identify' her."

Thomas Woodcock, who is Britain's Garter Principal King of Arms, which makes him the main adviser to the Queen when it comes to all ceremonial and heraldry matters, spoke about the act of bestowing a Royal Coat of Arms on a new member of the family.

Upon Middleton's wedding to Prince William, Woodcock said (via The Express):

"It’s not compulsory but as their daughter is marrying into the Royal Family she will have a need probably to use a coat of arms. Every Coat of Arms has been designed to identify a person, school or organisation, and to last forever: heraldry is Europe's oldest, most visual and strictly regulated form of identity and it surrounds us in Britain, giving clues to our history and surroundings. After her marriage, Catherine Middleton will place her father’s Arms beside those of her husband in what is known as an impaled Coat of Arms. This will require a Royal Warrant from The Queen."