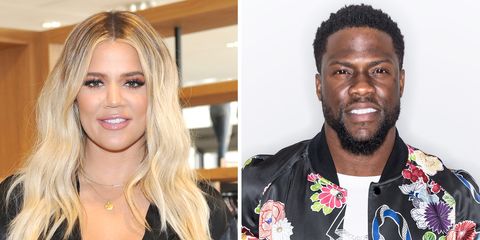 She captioned the video: "Got all types of namaste doing GOAT YOGA with @KevinHart4Real! 🐐🙏🏼Check us out on @WhatTheFit, streaming NOW on @LOLNetwork’s @YouTube channel. #WhatTheFit"

The fourth episode of the series came out today with the Keeping Up with the Kardashians star as his guest. She had no idea what Hart planned, so when he tells her they are going to try goat yoga, she's rightfully confused.

"Why would there be goats in a yoga class?" Khloé asks.

Hart doesn't actually know, but he says, "I knew that's what you were going to say. Because it's something about like the goats being around you...and the baby goat...it's a thing. It's really a thing."

Watch as Khloé bottle feeds a baby goat and as Hart freaks out when a goat poops next to his yoga mat. We won't spoil it all for you, so watch the full episode below and prepare to laugh a lot.

This content is imported from YouTube. You may be able to find the same content in another format, or you may be able to find more information, at their web site.
Related Stories
Thin? Fat? Who Cares? Wear the Yoga Leggings
Khloé Kardashian's Jaw-Dropping Lingerie Shoot
Khloé Kardashian Ready to Give Birth in Cleveland
Alex Warner
This content is created and maintained by a third party, and imported onto this page to help users provide their email addresses. You may be able to find more information about this and similar content at piano.io
Advertisement - Continue Reading Below
More From Celebrity
Zaya Wade Freaked Out Chatting With Michelle Obama
Harry & William Won't See Eye-to-Eye Any Time Soon
Advertisement - Continue Reading Below
Jennifer Lopez Stuns in a Little Black Mini Dress
Harry & Meghan Won't Throw the Queen Under the Bus
Harry & Meghan Have Nothing to Lose in Oprah Chat
How to Watch Meghan and Harry's Oprah Interview
Gigi Hadid Dyed Her Hair Red
How Celebrities and Friends Are Supporting Meghan
Meghan Didn't Need Prince Harry to Be Wealthy
Pregnant Emma Stone Runs Errands in Santa Monica